The head of the World Trade Organization (WTO), Ngozi Okonjo-Iweala, has welcomed a ruling by the Swiss media regulator that found a newspaper headline describing her as a “grandmother” after her appointment to lead the body, was gender-biased.

Aargauer Zeitung newspaper ran the headline: “This grandmother will become the boss of the WTO,” after Ms Okongo-Iweala was appointed in March.

The paper apologised following widespread criticism saying its headline had been “inappropriate and unsuitable”.

Mrs Okonjo-Iweala, a Nigerian-American, is a widely respected Harvard-educated development economist. She served as finance and foreign affairs minister in Nigeria and worked for 25 years at the World Bank.

The 67-year-old is the first African and woman to lead WTO.

She tweeted on Thursday that the Swiss Press Council was right for calling out gender bias and sexism.

I welcome the ruling of the Swiss Press Council calling out the gender bias & sexism of Swiss newspaper Aargauer Zeitung for its headline ‘Grandmother becomes boss of WTO’ upon my appointment. It is right to call out sexism, racism or both when you see it! https://t.co/BbUlCuSZKh

In its ruling on Tuesday, the media regulator said that it had been unable to determine if there was racial bias.

“However… it is obvious that if this had been about a male former finance and foreign minister in a country of 200 million people, the headline ‘a grandfather becomes the WTO director-general’ would be inconceivable,” Barron’s news site reported. 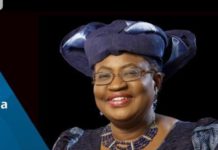