Man-to-man marking will be paired with drone versus drone security at this winter’s Fifa World Cup in Qatar.

It says the agreement reflects growing fears about the threat potential drone attacks pose in general.

Fortem says its system is a safe way to bring down drones in built-up locations, reducing the risks of injury that might be caused if weapons were used.

The autonomous, radafçg HHr-guided interceptor drones – dubbed DroneHunters by the firm – tackle small consumer drones by firing nets to snare the target drone which may then be carried to another location.

For larger drones, a net is launched at the target which is connected to a parachute, slowing the entangled target and forcing it to the ground.

Targets are identified using a “series of very small radars that are distributed throughout the venue, creating a complete picture of the airspace straight up into the air”, Fortem chief executive and co-founder Timothy Bean told the BBC.

The company claims the drones have had “live kills” at various security sites around the world.

But the roar of fans will not be accompanied by the buzz of drones because the machines do their work “a mile or so away from the venue”, Mr. Bean added. 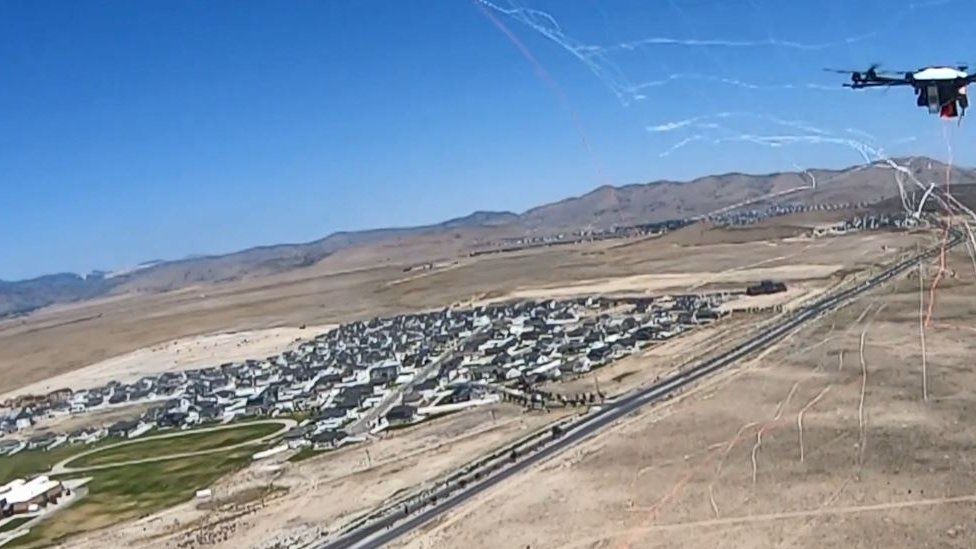 Image caption: A view from the target’s perspective of the expanding net launched by a Fortem drone

Alternative systems for stopping drones can rely on interfering with the drone’s control signals, but Fortem argues terrorists may launch drones on pre-programmed flight paths.

“The reason our business is skyrocketing is because terrorists don’t use joysticks. Terrorists don’t show up in your parking lot with a joystick. These drones are programmed … so they can’t be jammed,” Mr. Bean says.

The company says it has deployed anti-drone systems at other sporting events and at the World Economic Forum meeting at Davos. It has donated portable versions of its system to Ukraine and said it was also working on anti-drone measures for UK airports.

The Utah-based firm, which has received backing from Toshiba and Boeing, will work for the Qatari Ministry of Interior and Safety and Security Operations Committee at the World Cup in November and December.

Prof David Dunn, of the University of Birmingham, says that the threat from terrorist use of drones has increased because the technology has become more accessible.

He cites the unsuccessful attempt by suicide bombers, during the terrorist attacks on Paris in 2015, to gain access to the Stade de France, where France were playing Germany in a football friendly.

A drone might have been able to enter the stadium, he suggests, where ground-based terrorists could not.

Dr. Steve Wright, from the University of the West of England, also thinks concerns have been heightened partially because commercial drones have been modified into weapons in conflicts in Yemen and Ukraine.

He believes that systems like Fortem’s can be effective against a threat from smaller drones.

Dr. Wright, who is working on a similar system for a European company, believes that they expand the line of defense outwards from a venue, giving defenders more time to respond.

But he warns these are one step in an arms race and says that as attacking drones increase in speed, they will be harder to stop. 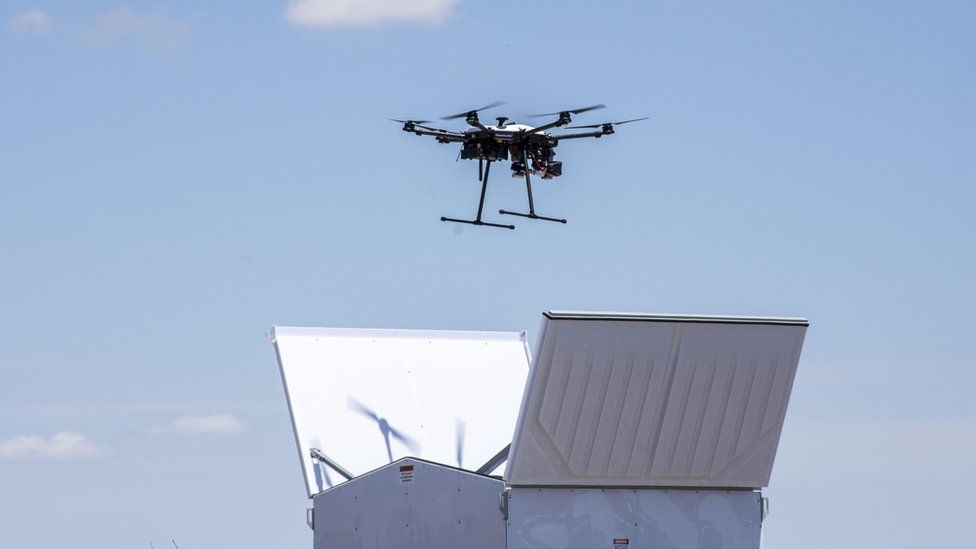 Image caption: A drone interceptor emerging from its hangar

“We’re looking at technologies of how we can push that out 200mph (322km/h), maybe even 300mph one day, as we squeeze the sponge of the electric technology we’ve got,” he said.

And attackers may make drones more maneuverable. Dr. Wright said his team had built a drone that could accelerate so fast it was like going from zero to 60mph (97km/h) in under a second.

So-called “swarms” of multiple attacking drones would also present a challenge. Dr. Wright said in the conflict with Yemen, “the Saudis are already seeing that problem starting to crop up as groups of these things are sent over the border simultaneously”.

But by requiring attackers to employ countermeasures, all drone defense systems make attacks harder, and so reduce the likelihood of one taking place. 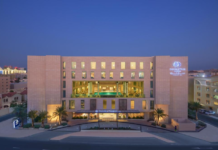 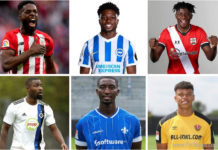