Cameroon coach Rigobert Song has suspended Andre Onana from his squad after saying the goalkeeper asked not to play their second World Cup group match amid reports of a falling out between the pair in Qatar.

Inter Milan keeper Onana started for the Indomitable Lions in their Group G opener against Switzerland, a 1-0 defeat, but he was replaced by Devis Epassy for Monday’s 3-3 draw against Serbia.

He was not listed among the substitutes.
In a statement, Cameroon’s football federation (Fecafoot) said that “following Song’s decision, Onana has been temporarily suspended from the group for disciplinary reasons.”

Now led by former team-mate Samuel Eto’o, Fecafoot expressed “its full support” for the coach, 46, as he implements policy “aimed at preserving discipline, solidarity and cohesion with the national team.”

Reports of dissatisfaction with Song’s tactical nous have emerged from the Cameroon camp, with suggestions the coach and goalkeeper have disagreed over Onana’s regular venturing out of his box.

The former Ajax Amsterdam star had more touches (61), some far from his penalty area, than any other goalkeeper at the World Cup against the Swiss, but his progressive approach is seemingly at odds with Song’s.

“He is an important player, but we are in a difficult tournament,” said the coach after the thrilling draw.

“I know what I have to do, and that is to ensure that the team takes precedence over any individuals.

“Andre wanted to step out and we accepted that position. In a squad, discipline is important.”

Onana started all of Cameroon’s games this year, having served a nine-month doping ban last year.

Asked by news agency AFP whether he would start Cameroon’s final match, Onana’s replacement Devis Epassy said “you’ll have to ask the coach” and insisted there was no problem in the camp. 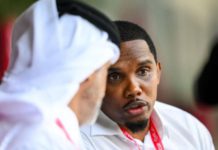