Adomonline.com
Home World Africa Women protest arrest of Husbands by the police
Facebook
WhatsApp
Twitter
Telegram
Email
Pinterest
Print
Thousands of women in Amagu community, Abakaliki Local Government Area of Ebonyi State on Tuesday protested the arrest of their husbands and sons by the police.
The report by PremiumTimes revealed that residents of the community and some government officials in the area have been at loggerheads over lead mineral deposit in the community. Some members of the community were said to be mining the lead without license from the federal or state government.
The police were alerted by some government officials in the area on the alleged illegal mining which led to arrest of six persons. The arrest triggered protest by youth of the area who blocked the entrance and exit points of the area to prevent police officers from leaving with the arrested persons.
The situation led to a clash between the youth and the police officers which left some persons injured. Another account indicated that earlier in the day, the police mobilised its officers and arrested over 30 members of the community.
Angered by this, women made up of the young and elderly took to the streets of Abakaliki to protest the arrest. The women were loaded in trucks from the community to Abakaliki where they marched round some major roads in the capital city to Abakaliki local government headquarters.
The women numbering over 2,000 with palm fronds on their faces, waists and other parts of their bodies marched to register their anger over the arrest. They then gathered at Nkaliki road junction where they took off to Abakiliki local government headquarters, Nkaliki. They were almost stopped by a team of police officers in over six hilux vans who blocked them on the road. 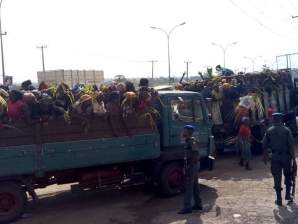 When they got to the entrance gate of the local government, they tried pulling it down as it was shut by the security officers. To disperse the women, police officers fired teargas on them.
Speaking with journalists, one of the protesters, Nwofoke Blessing, said “we are here to tell the council chairman that we are not happy the way our husbands and sons are arrested. We are telling him to release our husbands and sons.”
“Since yesterday morning they have been arresting our youths and husbands, even my husband was also arrested.
“This morning, they came back with seven hilux vans and continued the arrest of our youths and husbands. We were having meeting in our play ground when they came in and arrested our people there”.
“This is why we the women came out to see our council chairman, but police blocked us. We succeeded in coming to the local government to tell the chairman to release all our people. The problem is lead(mineral deposit) issue. Some government officials want to ‘carry’ all the mineral deposits without us benefiting and our youth said no that we are members of the community who should be carried along”.
Addressing the women, the Senior Special Adviser to the Governor on internal security, Kenneth Ugbala, assured them that the state government will look into the problem and resolve it amicably.
He urged them not to take laws into their hands as it would aggravate the problem. The chairman of Abakaliki Local Government Area, Emma Nwangele, refused to see journalists who went to his office over the matter. 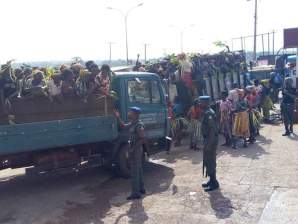 Reacting to the news, the police spokesperson, Loveth Odah, said there was a formal report against illegal mining in the community which the police acted upon and arrested six persons who were mining in the area illegally.
She dismissed the claim by some members of the community that over 100 persons of the area were arrested as according to her, only 27 were arrested.
“Police are investigating the matter and I think that is why the women are protesting. In no distant time, police will get to the root of the matter and their husbands and sons will be released to them.
“What we are appealing to them is to calm down so that they will not succeed in destroying more properties,” she said.
Source: Kemifelani