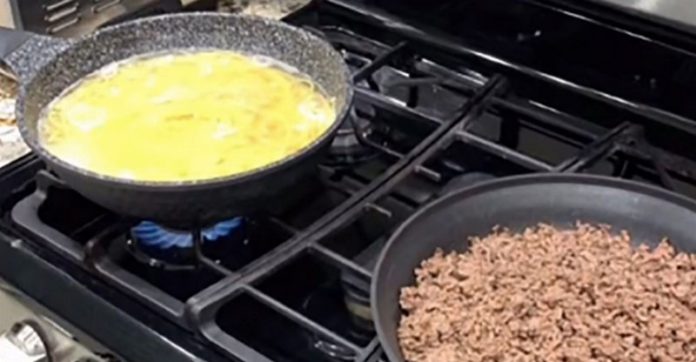 There are some famously clichéd ways that people learn they are being cheated on.

Lipstick on the collar, partner glued to their phone, a feeling of unease that lingers thanks to their suspicious behaviour.

One woman, called Kayla, claims she realises the man she was seeing had another woman around after he sent a photo of his cooking.

To make it worse, the food didn’t look great either.

The 26-year-old shared the rather unfortunate moment she realised what was happening on TikTok, adding: “Got to do better my guy.”

But it wasn’t the food she focused on – it was what she spotted in the reflection of the mirrored stove.

She zoomed in on the top left corner – where you can see a woman’s hands, along with her fake nails.

Kayla also noted that she was wearing bracelets, a rose gold Apple watch and a ring.

The video containing the heart-stopping moment has been viewed nearly 200,000 times.

Lots of viewers praised Kayla for her detective skills – as one admitted: “I wouldn’t have noticed that.”

Another added: “Don’t men know we are detectives?”

“Have you met this man in person because this screams Catfish?” asked a third.

Reality TV show Catfish exposed the truths and lies of online dating – and tracked down people faking their identities.

Online, a ‘catfish’ is a person who creates fake personal profiles on social media sites — usually pretending to be someone more attractive — by using someone else’s pictures and a fake bio.

Others were convinced that she’d made a mistake and that the man could be hanging out with a sister or relative.

But Kayla rebutted this, explaining in the comments that she’d confirmed it was another girl.

She added: “When I asked who it was, he said it ‘should’ve been you’,” along with a skull emoji.

Others were more confused about what the man was eating – for those concerned, it turns out he was cooking spaghetti and ground beef.

Another commented: “Please let that girl know. I would be so upset if I cooked for someone else and then he sent it to someone.”