A 34-year old woman, Gloria Moses has been arrested and charged before Ogba Magistrate’s court for allegedly attacking his neighbour, Gift Augustine with shovel in Lagos.

P.M EXPRESS gathered that fight broke out between the women after Gloria refused Gift’s children from plucking unriped mango fruit from their compound. 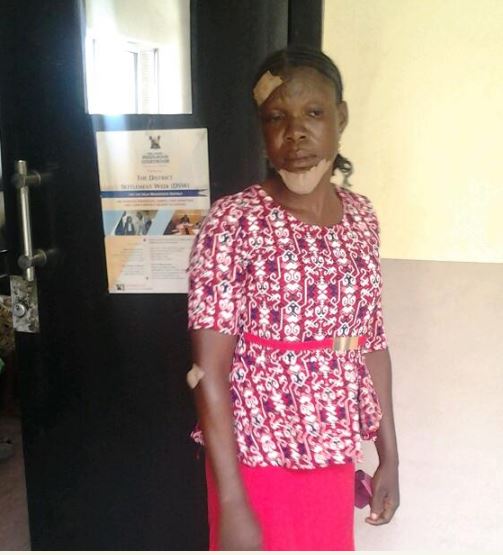 The victim, Gift Augustine
The incident happened at 55 Ige Faniran Street, Command area, Ipaja where they reside with their families.
The two women from Ebonyi State, it was gathered had been at loggerheads before the incident, engaged in public fight over the refusal of the victim to allow the suspect’s children to pluck the fruits which resulted to exchange of words.
In the process, the suspect allegedly carried a shovel and hit Gift’s jaw which fell off and she was rushed to hospital.
The matter was reported at Meiran Police division and the woman was arrested along with her husband’s friend, David Nwoha and detained over the assault.
They were charged with conspiracy and serious assault on the victim .
They pleaded not guilty .
They presiding Magistrate granted them bail in the sum of N100,000 with two sureties in like sum.
They were remanded in prison custody pending when they will perfect their bail conditions.