The Parliamentary Service Board says its decision to take the development of a new chamber block out of its present agenda was occasioned by its review of representations by well-meaning Ghanaians.

The decision to put on hold the planned new and larger chamber project, according to a statement issued by the Public Affairs unit of Parliament, was taken at a meeting held on Monday, July 8, to consider the burning issue.

ALSO: Shocking: Constituents ask MP to kill snake in toilet because he is their MP (Audio)

“The Board, has, upon reviewing representations made to it by well-meaning Ghanaians, accordingly taken the development of the new Chamber block out of its present agenda.

“The development of the Parliamentary enclave and a new Chamber block and offices shall however, remain an essential and integral part of the future plans of the Legislature, in a bid to provide a strong, accountable, responsive and transparent parliament to serve the purpose of Parliament”, the statement signed by Kate Addo, Ag. Director Public Affairs said.

ALSO: $200m chamber not in NPP manifesto – Dep. Minister runs away from deal

The issue has been topical since it emerged last week that the house was contemplating a new and bigger chamber to accommodate all persons who must appear before parliament. The public has been divided over the propriety or otherwise of the project. 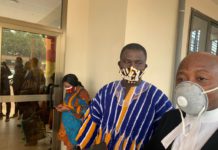