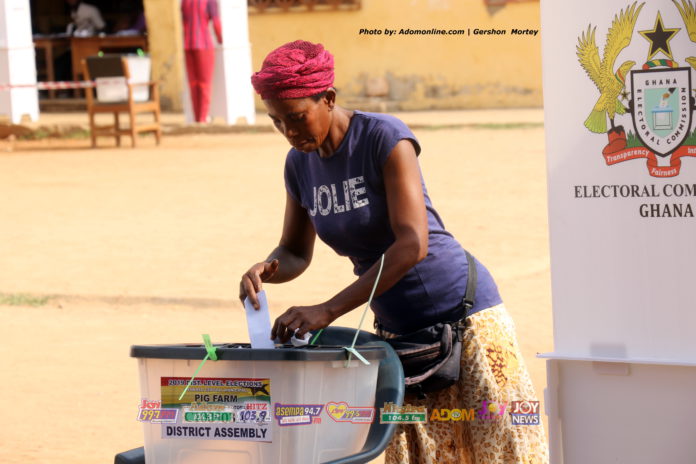 The Electoral Commission of Ghana is lacing its boots to commence mass voter registration in preparation towards the 2020 Presidential and Parliamentary Elections.

As I write this piece, there is in the Parliament of Ghana a new constitutional instrument to amend some sections in the C.I . 91 that was used to register voters for the 2016 Presidential and Parliamentary Elections, 2019 District Assembly and Unit Committee Elections and the Referendum for the creation of the six new regions.

On Monday, May 25, 2020, the cousin of the President of Ghana, Gabby Otchere – Darko posted on his twitter account a comment that set social media on fire.

Gabby tweets ” Out of Ghana’s 275 constituencies, Ketu South is the most populous constituency in Ghana in terms of the number of names on the electoral role(sic). Why and How? Discuss…

He went on to add “Ketu South constituency has 149,219 registered voters. Dome Kwabenya follows with 144,624 registered voters, with Ledzokuku ,142,995 and the Ablekuma Central ,137,154.”
Discuss the economic and/or social activities which give Ketu South the largest electoral roll in Ghana.

As a native of Aflao, I wish to touch briefly on the questions being asked by Gabby Otchere -Darko before I venture into my main topic.

Those who are not aware, Lawyer Gabby Asare Otchere – Darko posted something about Ketu South and had to come back and retract and apologize.

To be sincere, I would have loved to ignore the effusions from Gabby but the dimension it has taken demands that I also add my voice.

My response to the first tweet of Gabby is below:

The Ga East Municipal which hosts Dome Kwabenya Constituency has 147,742 people according to the Statistical Service data.

I want to leave out La Nkwantananmang which was carved out of Ga East and concentrate on the data provided by Statistical Service in respect of Ga East Municipal Assembly.

The voter population of Dome Kwabenya Constituency stands at 144,624 with less than 15 electoral areas .

The difference between the census data and thev electoral roll in Dome Kwabenya is 3,118.

I think Gabby Otchere – Darko should be interested in why Dome Kwabenya , a new constituency created in 2004 will shockingly have that alarming figure.

Ketu South has been Ketu South since 1992. Attempts to split it to two in 2012 suffered abortion and some of us still feel the pain.

You see, Ketu South, Manhyia, Ga South, Ga North and Bantama were constituencies with highest voter population in 1992, 1996 and 2000 elections.

Whilst Bantama, Ga South, Ga North and Manhyia were split into two or three constituencies, Ketu South remains the same till date. Ketu South was not split so it is justifiable for Ketu South to have more registered voters than Bantama Manhyia which were split to two – Bantama and Nhyiaso, and Manhyia South and Manhyia North, respectively. In short Bantama in 1992, 1994, 1994 and 2000 is not same as Bantama in 2016. Nhyiaso Constituency was carved out of it.

But Ketu South remains the same from 1992 till date.

In his second tweet, Gabby Otchere – Darko implores his followers on twitter to discuss economic activities which give Ketu South the largest electoral roll in Ghana.

I assume this one is harmless and time needs to be taken to educate.

The socio – economic activities in Ketu South cannot be swept under the carpet in Ghana.

Aflao, my town is in Ketu South and this is what is even stimulating discussions on several platforms.

Aflao shares border with the national capital of Togo, Lomé.

Lomé operates free port system and it pushes Aflao to its highest point in terms of economic activities.

A simple check at the Ghana Revenue Authority would have gotten Gabby educated on the economic activities at Aflao in Ketu South.

The economic prowess of Aflao has been evidenced in the revenue generated by the government from my town.

Because of the nature of economic activities in Aflao, a lot of businessmen moved from all over Ghana to Aflao to set up their new businesses.

The first four Akyem and Asante men I met in Aflao were shoe – shine ‘boys’ in my electoral area. They travelled all the way from their areas to Aflao because business was good.

They made a lot of money from this business in Lomé but they were resident in Aflao Duta.

The Banks, Freight Forwarders, the security and other businesses will naturally draw people from all over Ghana to Aflao.

If Gabby is not aware, Diamond Cement Ghana Limited recently donated 100,000 cedis cash and 150,000 cedis worth of cement to COVID 19 Fund.

We have salt factory here in Adina in Ketu South and people from all over Volta are working there.

I do not want to venture into economic activities in the three remaining major towns in Ketu South such as Denu, Agbozume and Klikor.

It will be too much for the day.

Gabby Otchere – Darko should know that Aflao in Ketu South should be a constituency on its own.

NOW WHO QUALIFIES TO REGISTER AS A VOTER IN GHANA

Article 42 of the 1992 Constitution states

” Every citizen of Ghana of eighteen years of age or above and of sound mind has the right to vote and is entitled to be registered as a voter for the purposes of public elections and referenda”.

Going forward, there two laws on Citizenship of Ghana. These are the 1992 Constitution and Citizenship Act, 2000 (Act 591)

CITIZENSHIP OF GHANA is conferred by the Articles 6 and 7 of the 1992 Constitution. They read:

(3) A child of not more than seven years of age found in Ghana whose parents are not known shall be presumed to be a citizen of Ghana by birth.

PERSONS ENTITLED TO BE REGISTERED AS CITIZENS

(3) Where the marriage of a woman is annulled after she has been registered as a citizen of Ghana under clause (1) of this article, she
shall, unless she renounces that citizenship, continue to be a citizen of
Ghana.

The combined effect of Articles 6 and 7 of the Constitution and Sections 1 – 13 of the Citizenship Act, 2000 is that many people accused of being foreigners in Ghana are actually Ghanaians and that they are unjustly denied their citizenship.

When this unjust accusation and abuse happened to one of the sons of Sylvanus Olympio, first President of the Republic of Togo, he fought for his right.

I will refer you to the case of Olympio vrs Commissioner of Interior, HC ( 30/7/1969, Unreported). In that case Bonito Olympio, one of the children of the first President of the Republic of Togo, Sylvanus Epiphany Olympio received a letter from the Principal Secretary of the Ministry of Interior of Ghana stating that his permission to remain in Ghana had been withdrawn and that he must leave Ghana within 48 hours.

Consequently, Bonito Olympio brought action seeking a declaration that he was a citizen of Ghana by descent, that he could not therefore be deported from Ghana and that he required no permission from the Ministry of Interior in order to remain in Ghana.

Justice Edward Wiredu (as he then was held that: Bonito Olympio, son of Sylvanus Olympio was a citizen of Ghana because his mother, grandmother and great grandmother were all born in Keta (Get the full judgment and read)

You see, I have a lot cousins and nephews in Lomé. Some are schooling there, others are working there. They are Ghanaians and there is nothing anyone can do about it because the law says they are Ghanaians.

Therefore in unlikely event that the Electoral Commission of Ghana starts the new voter registration exercise, these cousins and nephews of mine can walk to Ghana and register as a voter and no one dare stop them unless the person does not believe in the Supreme laws of Ghana, the 1992 Constitution. As you will agree with me, no one stops Ghanaians abroad from coming down to register.

So I will leave you with two questions:

FORM OF IDENTIFICATION AS A GHANAIAN TO REGISTER AS A VOTER

From the look of things, Electoral Commission of Ghana is on a slippery path. As stated earlier, the CI to amend some sections of CI 91 is before parliament. It mentioned two documents to be used to prove Ghanaian citizenship or nationality to register as a voter. These are Passport and Ghana Card.

In my view, it is absurd to exclude birth certificate from the list of documents needed to prove Ghanaian Citizenship.

How is Passport Acquired?
You see, if you go to passport office to apply for passport, the only document you need to prove Ghanaian Citizenship is BIRTH CERTIFICATE. Without birth certificate, you CANNOT acquire passport in Ghana (Check website of Passport Office or Ministry of Foreign Affairs).

How is Ghana Card Acquired?

So I can confidently write that Birth Certificate is the primary document to prove Ghanaian Citizenship to acquire Passport and Ghana Card.

So my question is why will Electoral Commission of Ghana exclude the primary document used to prove Ghanaian Citizenship when acquiring Passport and Ghana Card?

In my view, the Electoral Commission is acting in a capricious and arbitrary manner. It is ridiculous and illogical to exclude birth certificate which was used to prove Ghanaian Citizenship to acquire Passport and Ghana Card. EC’s intention is to disenfranchise so many Ghanaians. We call it elimination by rough tactics.

See this scenario. There is this community called NUKUNUKORPE where no one has registered for Ghana Card. In NUKUNUKORPE, no one had ever dreamt of acquiring Passport.

The Electoral Commission of Ghana is simply saying that since no one has passport or Ghana Card in the said community, they cannot register to vote even if some people in NUKUNUKORPE have Birth Certificates duly issued by Birth and Death Registry.

Let me conclude by advising that let us tread cautiously in handling these vexed issues.