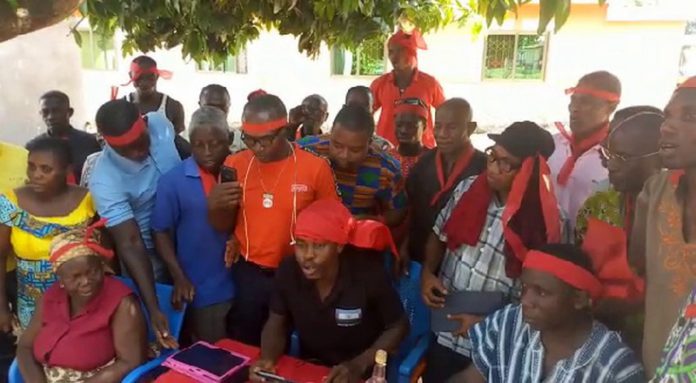 Leadership of separatist group Homeland Study Group Foundation has taken exception to a statement issued by the Minister of Information over its recent move to declare independence.

In a statement on Monday, Kojo Oppong Nkrumah said the group will be dealt with according to law as Ghana remains a sovereign state.

But a counter-statement issued by the group on Tuesday says its move had nothing to do with Ghana and that “the entire citizens of Western Togoland did not touch anything Ghanaian, if the minister is referring to the Ghana which was formerly called Gold Coast, a former British Colony then he should go back and look at the map of Gold Coast which is now Ghana particularly the years of 1844, and that of Togoland 1884”.

Find the full statement below:

The leadership of the Homeland Study Group Foundation has read with serious concern the statement from the information Minister of the Republic of Ghana, Hon. Kodjo Oppong Nkrumah.

In his statement, he said the Homeland Study Group Foundation has ceded part of Ghana and that the national security is taking action to deal with the group’s membership.

We wish to remind him, the populace of Ghana and the entire world that the membership of the HSGF and the entire citizens of Western Togoland did not touch anything Ghanaian, if the minister is referring to the Ghana which was formerly called Gold Coast, a former British Colony then he should go back and look at the map of Gold Coast which is now Ghana particularly the years of 1844, and that of Togoland 1884.

All are to note that our Land the Western portion of the maliciously divided Togoland in 1914 was not part of the Gold Coast (Ghana’s) land covered by the bond of 1844 which artificially curved out the Gold Coast (by the pen and finger of Commander Hill and a Fanti King) that the Western portion of the divided Togo is a separate country, State and Nation recognized as such since 1916 by the League of Nations and it since became the worlds Class B Territory and later the UN Trusteeship Territory to Britain Gold Coast, Ghana’s Colonial Master to be nurtured to independence and so also was done to the Eastern portion of the Togoland and France. The French and the British were disallowed from adding the divided Territories to their existing colonies of Dahomey (Benin) and the Gold Coast (Ghana) the French pass the Test while the English did not.

The case now rising has a long history to tell. A stolen property is always disputed over but often not if the suspect is peace-loving. The peace that HSGF embarked upon since 1994 should be carefully watched.

This matter needs Peace, Care and maturity to be handled. The HSGF is simply taken her property away it is the law of the international world that can deal with this matter and not the gun bearing authority of Ghana.

The HSGF therefore and hereby appealing to all Western Togolanders to remain focus and take it as true that the land which was the Western portion of the divided Germans Suzerainty of Togo is naturally theirs and that the long patient that they had exercise should not lead to explosion unless Ghana takes the life of a member of our populaces.