Rufftown Record singer, Wendy Shay, has been spotted in the church of Prophet Akwesi Appiah, the man of God who prophesied her kidnap and subsequent death before the end of the year.

The afro-pop singer was seen with a microphone at the podium of the church, as she thanked God for his revelations before pleading with Ghanaians not to attack the pastor.

She disclosed that Pastor Appiah wasn’t the first person to ‘see’ and prophesy her possible kidnap hence the need to do the needful to overcome any such occurrence.

Prophet Akwasi Appiah had prophesied during one of his services that the singer would be kidnapped for 21 days.

According to him, Wendy Shay, if not careful, would later be killed for rituals and her body left to rot.

The prophecy attracted mixed reactions with many people condemning the pastor for the way he delivered his message.

Wendy Shay, however, said in reaction to the pastor’s prophecy she was not troubled, saying it is not right for people to attack the pastor as she entreated her fans to pray for the prophecy to be averted.

Sharing a video of the prophecy on her Twitter handle, the ‘Uber Driver’ hitmaker explained that God revealed to redeem.

Hot photo drops as Wendy shay switches back to nursing 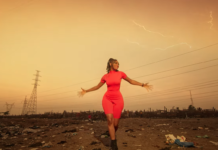