A married man, who believes his wife is spiritually possessed by her pastor, is in a dilemma whether to divorce his wife or still remain married to her.

According to the man, his wife’s family informed him that his to-be wife is spiritually possessed by her pastor a week to their marriage.

He said he still went on to marry her because the lady threatened to commit suicide should he decide to halt the marriage and accused her family of telling lies.

Making these revelations on the Joy News’ AM SHOW, the man said five years into the marriage, everything has gone bad for him. His wife has not conceived and the marriage is full of nightmares and diseases.

SEE THIS: I would’ve been a better artiste without my marijuana addiction – Lord Kenya

Bishop Dr Fred Korankye Mensah, a psychologist and a Minister of the gospel believes the man’s wife is not possessed as he thinks, but rather the situation is more psychological than spiritual.

“It’s psychological than any other thing we can think of, I don’t think that his wife is possessed by any pastor, psychologically, when we are made to believe something our belief gives what we have believed in power and that is exactly what has happened. Once they gave him the information and he believed it, mentally his believe is giving that the power to wreck havoc in his family, so I think it is psychological than spiritual, and in the first place human beings can’t  possess other human beings,” he said in an interview on the AM SHOW.

To him, it was just jealousy and mischief on the part of the lady’s family to tell the man that his wife is spiritually possessed by her pastor.

“I think its jealousy and mischief from the part of the lady’s family, because if she was possessed it wouldn’t be her family to poison the man’s mind not to marry her, it should be someone else, and for the family to be happy that the marriage is not working, its mischief on their part he shouldn’t even think of divorcing his wife. I think they both need psychological help,” he added. 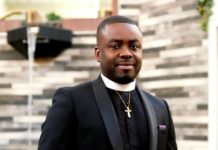