Controversial musician Wanlov the Kuborlor has openly declared his romantic fantasies for Afro-pop singer and Zylofon Music signee, Rebecca Acheampong, popularly known as Becca.
Wanlov, who already has 5 children with 5 different women admitted in a recent interview with Gatuso on Kasapa  Fm’s ‘Aben Wo Ha’ show, he will swoon at the feet of Becca whose sexual appearance sends shivers of delight down his spine.
It seems the Owusu-Bonsu family has suddenly found some sort of attraction for music stars as his younger sibling; Sista Debby can’t keep her eyes off AMG rapper and lover; Medikal, as the country-couple as their always seen in public display of affection.
The controversial and outspoken Wanlov, who is also well known for his hyper-sexuality however did not disclose if his attraction for Becca was purely out of love. 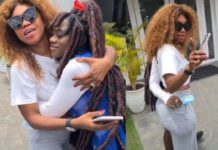