Some 180 condemned prisoners are languishing on death row at the Nsawam Medium Security Prison because successive Presidents had, since 1993, refused to sign their death warrants.

The condemned prisoners include 174 men and six women, with many of them being sentenced to death by hanging for murder.

The Nsawam Medium Prison is the only prison in the country with a condemned block that can hold 200 prisoners.

Speaking to the Daily Graphic in Accra last Wednesday, the Public Relations Officer of the Ghana Prisons Service, Superintendent Vitalis Aiyeh, said he was not in a position to explain why Ghana’s Presidents would not sign death warrants.

“Of course, we are in a democratic dispensation and all over the world people are clamouring for the abolition of the death sentence, so that could be a reason,” he, nonetheless, said.

The Constitution states that individuals who commit treason against the constitutional order “shall, upon conviction, be sentenced to suffer death”.

Genocide includes acts committed with the intent of destroying in whole or in part a national, ethnic, racial or religious group: killing or causing serious mental or bodily harm to members of the group, inflicting conditions intended to destroy the group and imposing measures to end births in the group.

For smuggling, the law says any individual concealing or carrying away from Ghana any gold or diamond without lawful authority or with the intent to evade any enactment concerning the export of gold or diamond “shall be liable on conviction to a sentence of death”.

After the conviction, the President will have to append his signature to a death warrant before the death penalty will be carried out.

Supt Aiyeh said condemned prisoners went through a lot of psychological torture “because the man is there and he wouldn’t know when he will be killed”.

”So when you are there, it is between you and your God, unlike the normal prisoner who knows one day he will go home,” he added.

He explained that one relief for condemned prisoners was that they could have their sentences commuted to life sentences after serving 10 years or more in prison, saying, however, that that would have to be done through the process of amnesty.

The last time such amnesty was granted in Ghana was in 2016 when three people had their sentences commuted to life.

Nana Boahen, who is based in Sunyani, faulted Presidents of the Fourth Republic for failing to sign death warrants when nothing stopped them from doing so.

“Rawlings, Kufuor, Prof. Mills, Mahama, Nana Akufo-Addo — none of them signed the death warrant, why?” he asked.

He said there was brazen impunity in the country, with people committing murder, sometimes in public places and in broad daylight, adding that he believed the death sentence, when carried out, would help check the killings.

He said failure to carry out the death sentence had emboldened criminals to go out to kill, without any fear.

The legal practitioner said there were four ways in which the death sentence could be carried out — hanging, firing squad, electrocution or lethal injection.

“In all these cases, the pronouncement must be made by the judge,” he said.

But Mr Sosu, a human rights lawyer, said no one had the right to take another person’s life.

He said there had been many instances of people who were alleged to have killed being later found to be innocent.

According to him, the reason Presidents had not signed death warrants could be that they were sensitive to the provision concerning the right to life.

He also argued that the international community had moved away from killing people who had killed others.

“Punishment has revolved over the time. It used to be retributive, but now it is more of corrective,” he explained.

Touching on how the country should deal with people who had been condemned to death, he said their sentences should be communed to life sentences.

“Keeping them in condemned cells is different from keeping them as life prisoners. In the condemned cells, you sometimes don’t have the right to sunshine; they are kept in dark rooms for many years and that affects their health in general,” he said.

Mr Sosu posited that to keep people in condemned cells without signing their death warrants and not make them lifers was a clear violation of the dignity of those people.

He said if Presidents were not ready to sign the death warrants of prisoners on death row, then the courts must begin to move away from giving death sentences, providing the caveat that “that also calls for legislative reforms”.

The human rights organisation, Amnesty International (AI), is strongly opposed to the existence of the death sentence in the statutes.

According to AI, Ghana was among the countries that had not been executing prisoners on death row but, strangely, it was yet to stop sentencing criminals to death.

The Country Director of AI, Mr Robert Akoto Amoafo, told the Daily Graphic that Ghana needed to learn from other sub-Saharan African countries, including Guinea and Kenya, that had abolished the death penalty.

He said it would be sheer wickedness for a President to append his signature to a warrant for someone to be killed. 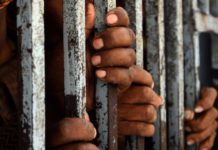