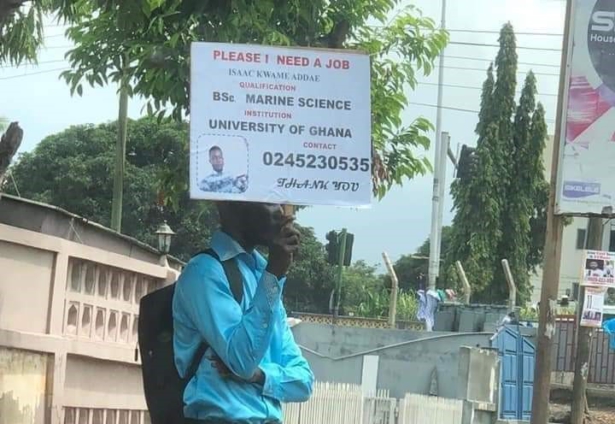 The University of Ghana graduate who went viral for standing by the road with a placard appealing for employment has revealed the outcome of his unconventional technique.

According to Isaac Kwame Addae, he has received job offers from at least 50 organisations.

He said despite being mocked on social media following the viral photo, the courage to put himself out there has paid off.

“It was very difficult initially. People kept laughing at me that I decided to move to a different location. When I got there, I was inspired to stay because other people kept telling me I’ll find a job.

“I spent about an hour and 30 minutes in the sun. But now, more than 50 companies have offered to employ me,” he disclosed in an interview on Accra-based GHOne TV.

I’ve received calls from over 50 companies offering me jobs and introducing me to the business side of Aquaculture. I’ve sent my CV to them hoping for a positive feedback – Isaac Kwame Addae

The Marine Science graduate further noted that despite receiving calls for jobs, he is currently waiting for feedback.

He also noted that some callers recommended Aquaculture opportunities which he is considering.

“I have qualifications in Marine and Fisheries so if it is the fisheries aspect I will gladly embrace it. If I also get the Marine Operations Department at the habour, I will grab it.

“I am willing to accept other jobs, once it can put food on the table, I will be ready to adapt and learn,” he said.

A photo of Mr Addae went viral over the weekend after a photograph of him holding a placard displaying his predicament went viral.

The viral photo showed him in a black pair of trousers and shoes, as well as a light blue long-sleeved dress, with a black backpack.

“Please I need a Job,” was boldly inscribed on the placard. The poster also had his telephone number and qualifications.