Award-winning Ghanaian record producer, rapper and sound engineer, Elorm Adabla known in the music world as E.L has released a song titled “We Are One” in tribute to the fallen soldier Captain Maxwell Adam Mahama.

“We Are One” follows Shatta Wale’s tribute released last Wednesday commiserating with the family of the soldier.

Captain Maxwell Adam Mahama, who was with the 5th Infantry Battalion met his untimely death last Monday, at Denkyira Obuasi in the Central region.

He was lynched to death and burnt by the youth of the area.

Capt. Mahama was Commander of about 100 officers who were sent to the Denkyira-Obuasi township to assist the government in the fight against illegal mining. 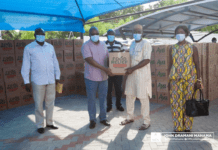 Man home alone films ‘haunted dolls moving on their own’ inside...

I don’t have any intention of marrying again after 7 kids...