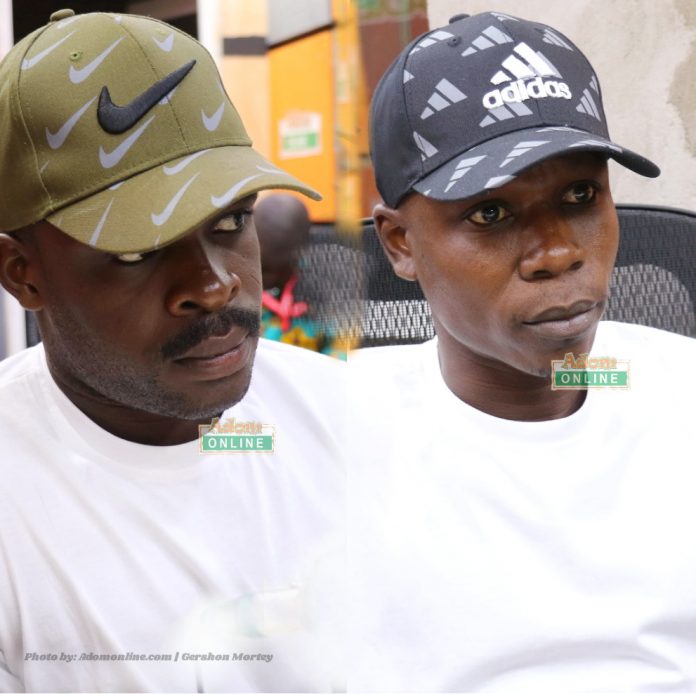 The bus driver and his mate accused of assaulting a police officer have narrated the ordeal they suffered in the hands of the police after the incident.

Francis Buabeng, 26, and Albert Ansah, 33, were detained at the Odorkor Police cells for more than 48 hours and were subjected to severe beatings.

The driver said after writing their statement, which they later found was falsified, “we were forced to plead guilty to the offense.”

Speaking on Adom FM’s morning show, Dwaso Nsem programme, Thursday, he said he stopped behind a faulty trailer and was shocked to be accused by the police officer sitting behind an Okada of parking at the wrong place.

What triggered the assault?

“The angry police officer jumped into the car wanting to take out my key. I prevented him and he started hitting my head and face. When my mate tried to intervene, he pushed him to the floor. When I got down to ask him of my crime, he started the fight. I had had enough of the beatings so I returned the beatings, assisted by my conductor (mate),” he narrated.

Mr Buabeng said it is not true that he jumped the red light as is being alleged by the police.

The driver and his mate accused the police of assaulting them while they were in their custody.

The assault, they claimed, started immediately they were detained at the Odorkor Police cells.

“Every police officer including women who saw us beat us. Either they punch us in the face or give us some dirty slaps with handcuffs in their hands,” Mr Buabeng recounted.

His mate, master Ansah, who was the first to be arrested, said his eardrum had been affected due to the incessant slaps.

The assault was elevated, they alleged, at the Police headquarters after meeting the Inspector General of Police (IGP), David Asante Apeatu.

“After our meeting with the IGP, he asked the police officers to keep us in one of the cells. Later in the day, some police officers in mufti beat us so much that at a point I thought I would die,” Mr Buabeng narrated.

Their only respite, he noted, was when they were sent to the Bureau of National Investigations’ cells and were given medication to treat the wounds.

The Ghana Private Road Transport Union (GPRTU), the umbrella body for commercial drivers, later intervened to get the suspects released.

ALSO READ: Sack me if power is not stable in 10 days – Ghana gas engineer [Audio]

They said when they followed up, they realised that the driver and his mate had been assaulted.

Alhaji Moro noted that when they conducted their independent medical examination, they got confirmation of torture.

“We became very angry since they were only suspects in the case. We won’t allow our members to be lawless, but when the situation calls for it, a driver must defend himself,” he observed.

He said they managed to mobilise a team of lawyers to secure bail for the two.

ALSO READ: Govt to reduce passport fees for residents in US [Video]

“When we got to court, we were surprised to see nine lawyers ready to defend the driver and his mate. When they got the bail, our chairman used his house as surety,” he disclosed.

Alhaji Moro assured that the GPRTU would follow the suspects till justice is served.

Meanwhile, the driver and his mate have been charged with assaulting a police officer and causing road obstruction among others.

The case has been adjourned to April 15, 2019 for prosecution to start at the Weija Circuit Court.