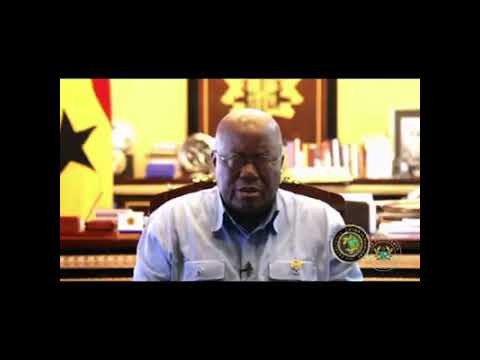 President Nana Addo Dankwa Akufo-Addo has urged Ghanaians to work together to develop the country in a video message ahead of the Easter festivities.

“With mobilisation of our collective energy and prayers, I am confident we will move this nation to where she has to be; a Ghana beyond aid, a modern self-reliant nation capable of generating prosperity for the mass of her people and govern according to the rule of law and respect for human rights and the principles of democracy.”

He said he was confident in Ghana’s potential to be self-reliant and capable of generating prosperity for all citizens.

“If my people, which are called by my name, shall humble themselves, pray and seek my face and turn from their wicked ways, then I will hear from heaven, and will heal their land,” the President read a passage from the second book of Chronicles 7:14.

Christians are geared towards the Easter festivities, which began on Thursday, the commemoration of Jesus Christ’s Last Supper with his disciples. It was at this event that Judas Iscariot, one of his 12 disciples, betrayed him with a kiss to signal the Roman soldiers to arrest him.

READ: Police to use drones to combat crime in Kwahu

On Friday, Christians in Ghana and across the world will celebrate Good Friday, which marks the Crucifixion death of Jesus Christ, at the hands of the Romans some 2,000 years ago, at Calvary.

The
day is significant on the Christian calendar, as it affirms the belief
in the sacrificial death of Jesus Christ to reconcile man with God
following the curse and separation caused by the disobedience and sin of
Adam and Eve.

Most churchgoers would wear traditional mourning clothes – dark colours mainly, in black, red, and brown.  Solemn hymns and songs, amid the preaching of repentance and salvation, would characterise the services.

Some churches are holding conventions across the country, while the Catholic Church would organise the Stations of the Cross to depict the journey of Christ’s agonising march to his crucifixion and death.

Easter
Sunday is marked by worshippers clad in white attires with joyous early
morning services to celebrate the victory of Christ over death and the
power of God over the devil.

It also affirms the belief that faithful Christians will enjoy eternal life in heaven.