The actor who says he is very good at playing the trumpet and singing as well decided to sing the Nigerian musician, Davido’s hit song, ‘No do Garagara for me’ for her to show how much he loves her.

The two love birds have been in the news for some time now especially after their intention to tie the knot came public.

Some Ghanaians however raised questions about their relationship opining that the 62 year old actor is too old to be the grandfather of his 27-year old.

One of such persons is controversial Marriage Counselor, George Lutterodt who had a confrontation with Lebene and accused her of wanting to ‘kill him’. He also accused Kofi Adjorlolo of seeking to use Lebene as energy drink.

In an interview with Joy News’ Becky Darko, the award winning actor expressed his love for his girlfriend by singing Davido’s new hit song, ‘No do Garagara for me’ for her.

The actor is a lead character in a new hit movie, New Sun which would be premiering on 29th April, 2017 at the Silverbird Cinemas at the Accra and West Hills Malls.

He further urged members of the public who would want to see him express his love towards the young lady to meet him at the premiering as he would be walking on the red carpet with her.

Watch Kofi Adjorlolo sing for her love in the video below: 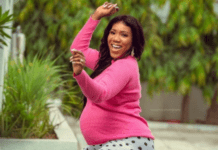