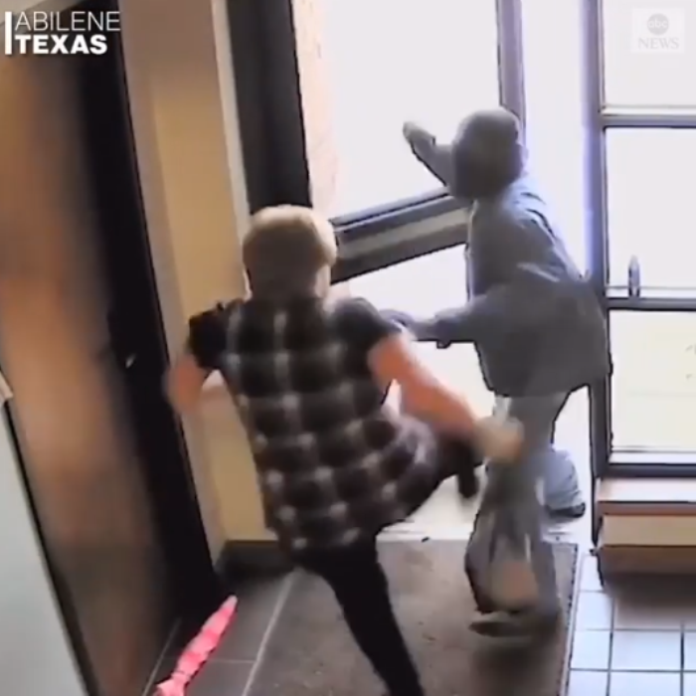 An elderly female bank employee has been hailed after she fought off an armed bank robber and forced him to leave the premises.

In an incredible video shared online, the bank robber, who detectives have linked to multiple bank robberies in Texas, is seen in a bank hall with a gun.

But, the brave elderly woman fought him off and refused to cower even as he hit her with his gun and pointed it at her. She succeeded in kicking him out of the premises.

READ: Rousing welcome for Manaf after dismissal from Presidency

The woman in the video is 60-year-old Jill Beaty. Beaty is a bank teller for the First State Bank and was the first one on location that day. Police say that she was inside the bank alone for 15 minutes and then went to unlock the door for a fellow coworker.

When she opened the door a masked man, armed with a pistol, jumped out of the bushes and forced her inside. But she bravely fought him off.

The Abilene Police Department honored Betty on Tuesday night, October 1 for fighting off a bank robber during a heist which took place on September 24.

READ: Rousing welcome for Manaf after dismissal from Presidency

Abilene Police Chief, Stan Standridge presented Beatty with a “Certificate of Commendation” on Tuesday during National Night Out.

“She is a remarkable citizen. She showed remarkable calm. She never lost her head. She in fact negotiated with him,” said Standridge.

Now the Abilene Police Department has released footage of the heist so viewers can help identify the armed suspect. The man is now wanted for three separate bank robberies. Two of them were in Abilene and the other in Clyde.

Above is the video of the 60-year-old teller fighting off the bank robber: