The snapdragon or dragon flower is one of the most popular plants in gardens around Europe, United States, and North Africa.

Named for its resemblance to a dragon’s mouth that opens and closes when lightly squeezed, this beautiful flower also has a dark side. When its petals wither away and fall off, they leave behind dried seedpods that look a lot like creepy tiny skulls.

One of the few plants to resemble something when alive and another thing entirely when dead, the snapdragon flower has inspired various legends ever since ancient times.

According to one story, women who eat the tiny skull-like seedpods will regain their lost youth and beauty, while another says that scattering them throughout the house will protect residents from curses, sorcery and other evil things.

In the Victorian age, due to its duplicitous appearance, the snapdragon flower was a symbol of deception, suspicion, and mystery, and legend had it that concealing a flower in someone’s clothing made them appear fascinating and gracious.

In the language of flowers, the snapdragon is said to represent both deception and graciousness.

But how does the beautiful snapdragon flower turn into a creepy skull? According to biochemist/blogger Johanna L. Roose, all comes down to the snapdragon’s flower structure and its bilateral symmetry.

“The skulls are really the seed pods of the plant after the flowers have been pollinated and the petals have withered away. Dissecting the flowers in their prime shows the ovary at the base of the bloom.

The pollen-containing stamens and the style emerge from the orifices in the ovary. These structures leave behind gaping holes that look like a mouth and eye sockets,” Roose explains.

That doesn’t sound very impressive, but looking at these dried snapdragon seedpods, it’s just amazing how much some of them actually look like small skulls.

If I didn’t know what they were beforehand I could swear skulls do actually grow on trees, or someone just photoshopped them onto some twigs. It just goes to show you how weird yet fascinating nature can be sometimes.

Looking at these creepy skulls, it’s easy to forget just how beautiful and vibrantly colored the snapdragon is when it’s alive. 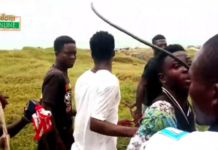 Wisa Greid is below standard – Tinny on why he will...