In downtown Barquisimeto, Margaret Khawan’s pharmacy is looking a bit empty these days.

What products she does have she has spaced out along the shelves to make them look a bit fuller.
Ms Khawan has not had any deliveries of contraceptive pills for a year.
Every day people come looking for them and every day she has to turn them away. People are having to adapt.
“It used to be just men buying condoms but women are buying them too now because there’s nothing else,” she says. “The price of condoms has gone up 200%.”

Across town, Darnellys Rodríguez is living the consequences of these shortages.

She had her first baby when she was 15 years old. Then she had a second baby, and hoped that would be it, but then she got pregnant with her third.
“My first reaction was to cry,” she says. “Getting contraceptive pills is really hard. There’s nothing and when you can get hold of them, the cost is beyond my reach.”
Financially it is a struggle. She lives with her children and partner in a corrugated iron shack in a poor neighbourhood of Barquisimeto.
Now she is pregnant, she says her older boys have to go without clothes and shoes so she can pay for some of her medical tests.
“I’m making plans to get sterilised,” she says. “The idea of having another baby is too much.”

According to the United Nations Population Fund, around one in four babies in Venezuela is born to a teenager. The country has the highest rate of teenage pregnancies in Latin America.
“It’s a situation that’s got worse in the last year,” says Delia Mondragón, the vice-president of the Association of Family Planning in Lara state, where Barquisimeto is located.

“It’s especially hard for young people. A box of contraceptives could cost as much as what their parents earn [in a month], or even double that.”
Every weekday, her waiting room is full of women coming for advice or medical help.
One of the other big concerns is malnutrition. Recent research suggests that three-quarters of Venezuelans lost weight in the past year, an average of 9kg (20lb).

“They’re not eating because the family doesn’t have food, they don’t have anything to eat.” Ms Mondragón says. “So malnutrition is really severe. When they go to give birth, we’re finding lots of malnourished girls.”

Women are often asked to bring a “kit” of medical supplies to the cash-strapped public hospitals. Gloves, antibiotics and robes to hand to the doctor before they give birth.
There are no official statistics but paediatrician Dr Huniades Urbina Medina, the president of the Venezuelan Society of Childcare and Paediatrics, says that of the births he attends, the vast majority are now unplanned.
He says it is a public health emergency.
“An adolescent at 12 or 13 or even 15 is a child giving birth to another child,” he says.
“They don’t understand what it means to be a mother. It’s like a play for them but it’s a real problem for us paediatricians, for obstetrics, for the hospital, for the future of the country.”
Dr Urbina blames the problem squarely on the government. “When an adolescent gives birth, almost 80% leave school and that’s a big problem,” he says.
“The government, instead of teaching sex education, gives you money if you are an adolescent mother, gives you a house. So a teenager thinks if she if gets pregnant, she can leave her house and become an adult.”
The BBC asked to speak to the health ministry but had no response.

Betsimar Villalobos Reinosa is certainly growing up in 2017. She turned 15 and, like many Venezuelan girls, had a big party or quinceañera, marking her passage into womanhood.

And in two months’ time there is another important date: the birth of her daughter Josehanny Alicet.
The family says her pregnancy was a surprise and a disappointment to them.
But her mother Juana is practical and says she will do what she can to support her daughter.
“I never imagined it would happen,” she says. “There’ve been lots of young girls getting pregnant recently because of the crisis. Some girls try and find men because they’re going hungry – they want somebody to provide for them.”
Betsimar wants to go back to school after the birth of Josehanny but there are no guarantees that will happen.
“I’m afraid,” she says. “Once I give birth, because it’s hard to get contraceptives and condoms, I’m scared if I have sex I will get pregnant again.”
BBC 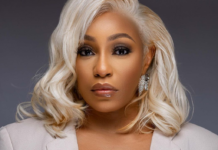