The Ashaiman Municipal Chief Executive, Mr Albert Boakye Okyere, has issued final warning to hawkers, traders and Okada riders, who have occupied the streets resulting in huge vehicular traffic in Ashaiman up to Sunday, August 13, 2017 to vacate.
According to him, the Assembly would not hesitate to arrest those who will be caught doing business on the streets after the deadline and sent to court for prosecution.
Mr. Albert Boakye Okyere issued the final warning when he and some officials of the Assembly including, the Municipal Coordinator Joshua Asihene Adams and Municipal Head of Works, Ing. Daniel Kwadwo Afrifa as well as the police met with the traders and the hawkers.
“Listen and listen well. I know that this is not the first time you’re being told not to do business on the road, but I want you all to know that this is the last time we are telling you not to do business on the road.
“Because from this Sunday’s coming week, nobody in Ashaiman will be allowed to continue to do business on the road and those who want to be stubborn should dare us,” he warned.
Mr. Okyere cautioned the traders and hawkers against treating the Assembly’s directive with contempt by thinking that it is one of the usual rhetoric. 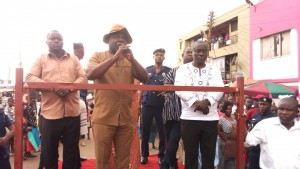 He entreated traders who may have given monies to some individuals and given them space to do business on the streets to go back and demand for their monies, saying “I’m ready to assist you to retrieve those monies.”
The tough talking MCE vowed to use the law to restore order and discipline, since the perception of most Ghanaians about Ashaiman was not the best.
“The days of indiscipline in Ashaiman are over and whoever wants to disobey authority must be prepared to face the full rigours of the law,” he stated.
Unlawful Parking
Mr Albert Okyere expressed disgust at commercial drivers who park haphazardly on the streets thereby compounding the traffic situation.
He said the Assembly would henceforth not tolerate such behaviors.
According to him, it is an offense per the Assembly’s bye laws for drivers to park any how hence will begin to arrest and fine drivers who engage in unlawful parking.
Paying Weekend tolls
The MCE further announced that the Assembly would in the coming days start collection of market tolls from traders and hawkers who operate during weekends including Sundays.
He was hopeful the Assembly would be able to raise more revenue during the weekends to support the development of the municipality.