From wigs to weaves and hair extensions, the market for human hair is enormous. But few know where these lustrous locks come from and the journey they take across the globe.

Go online in search of a wig or hair extensions and you'll be presented with a dizzying spectrum of choices. “Luxury” virgin hair from Brazil or Peru. “Pure” Mongolian hair. “Finest remy” hair from India. Sleek European weaves. But very rarely will you see hair from China advertised – even though that's where most of it is from.

China is the biggest exporter and importer of human hair and harvests huge amounts from its own population, as Emma Tarlo discovered on a three-year quest to untangle what happens to hair once it is no longer attached to our heads.

“People who work in the industry are conscious of the fact Made in China is viewed as a negative label and market it in more glamorous ways instead,” says the professor of anthropology and author of Entanglement: The Secret Lives of Hair. 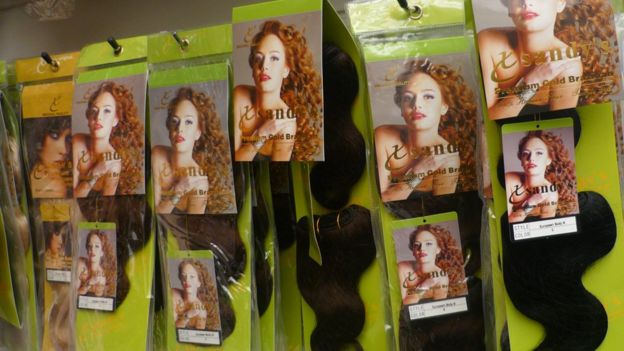 Consult the many online hair glossaries, blogs and tutorials and you'll be told that Chinese hair is the coarsest, that Filipino hair is similar but much shinier, that Brazilian hair is “full-bodied with a beautiful bounce” and Indian hair is “versatile with a natural lustre”. Definitions are as varied as they are vague.

“The more you try to make sense of it, the more elusive it becomes,” says Tarlo. “European hair is the most valuable, partly because of its fine textures, the variety of its colours and because it is in shorter supply.” Most of this hair comes from countries in Eastern Europe, such as Russia, Romania, or Ukraine.

At the top end of the market is “virgin” hair – hair that has never been chemically treated – and “remy” hair, which has been cut or shaved directly from a donor.

And then at the opposite end of the scale is “standard hair” – often used as a more marketable term for comb waste. Yes, Chinese or otherwise, many sleek and shiny hair extensions start life as hairballs, collected from combs and plugholes. 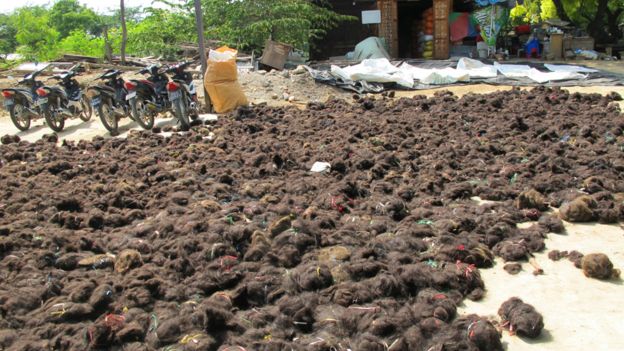 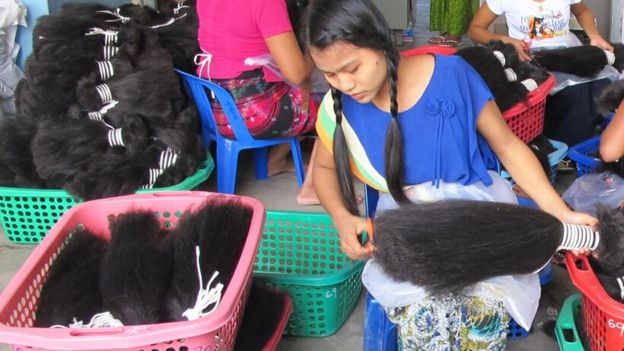 “Chinese factories will often call the comb waste hair 'standard hair' because a lot of the hair comes through that route,” says Tarlo.

“In terms of marketing it's up to the integrity of traders all the way along the line to specify what hair is what. Quite a lot of mislabelling goes on and often the people buying it don't ask questions anyway.”

This applies to the consumers in the salon too, according to Tarlo.

“People don't want to be haunted by the ghosts of the people from whom the hair has come. There is still a 'yuk' factor to the whole idea of buying and wearing other people's body parts,” she says. The whole supply chain is shrouded in secrecy from beginning to end. 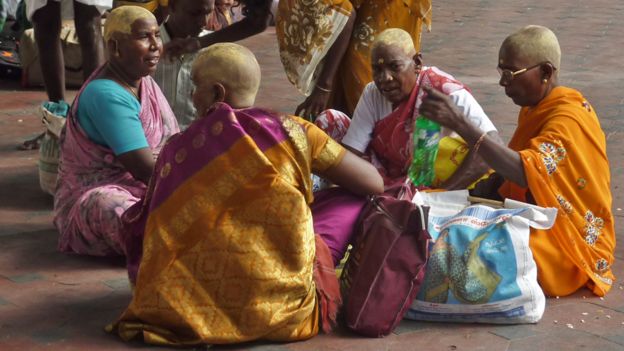 There is a whole industry around untangling, sorting and treating comb waste. While the finished product invariably passes through China on the way to its final destination, it is likely to be a mishmash of hair from many Asian countries. “There is no distinction, it all gets mangled up,” says Tarlo.

“All over Asia, long-haired women will save the hair that comes out when they comb or wash it and once they've got a few years' worth they'll sell it to the pedlars who go around these neighbourhoods calling out for hair,” says Tarlo. Out of a bag she pulls some of her own hair – it's a dusty mound of comb-waste collected over three years and worth about 80p ($1), she says.

All this hair gets amassed, passed from trader to trader, until it ends up in hair-untangling workshops in parts of Bangladesh, India and more recently Myanmar – countries where wages are low and people need work.

Tarlo visited workshops and homes in Myanmar and India, where she saw dozens of women sitting on the floor untangling other people's hairballs and then sorting them into bunches based on their length. “It's painstaking work, and very labour intensive – 1.5kg (3.3lb) of hair takes around 80 hours of labour to untangle” she says. 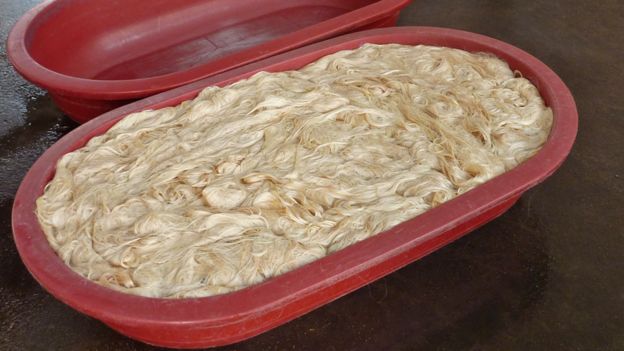 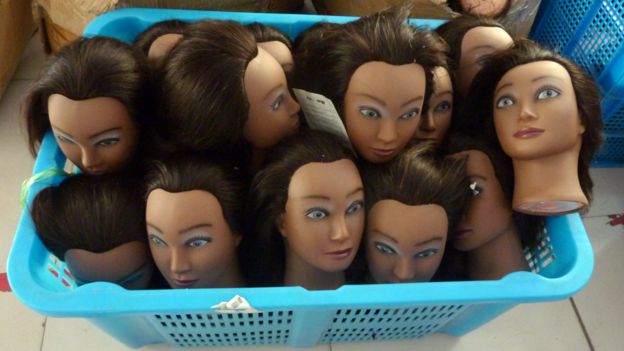 In Myanmar women were given 100g (3.5oz) of hair in the morning and another 100g in the afternoon. Villagers would also come in to buy mounds of the comb waste to take home, untangle and then sell back to the hair brokers.

Next comes the processing. The outer layer of a hair – the cuticle – has scales, all of which point in the same direction, like the scales of a fish. But the problem with comb waste is that hair is mangled up – the scales point in different directions causing it to tangle and knot. In China the hair is typically put in a chemical bath to remove the cuticle completely, Tarlo explains. “This resolves the tangling but the lack of a cuticle results in somewhat lower quality hair,” she says. “Nonetheless, by the end of this process it can look fantastic, like prize pony tails. You wouldn't know what a journey that hair has been on.”

The politics of hair

Throughout history, the international hair market has always had a political dimension, says Tarlo.

When the Manchu [Qing] dynasty was overthrown in China in 1912, an order went out that men should cut off their plaits and some had their hair forcibly removed by the Revolutionary Guard. “Many of these plaits came on to the hair market but traders worried their source of long hair combings from men's plaits would run out if men no longer had long hair.”

The Chinese hair industry hit problems again in the late 1960s, when the US imposed a ban on so-called “communist hair”. “It was at this point that Indian hair became important to the industry,” says Tarlo.

Millions travel to Hindu temples in southern India every year to get their hair shaved – or “tonsured” as it is known when it is done for religious reasons. It's an age-old tradition.

“It is done as a religious offering in fulfilment of a vow, and in earlier times was just left to float down the river and go to waste,” says Tarlo. She describes the buzz of the tonsor halls where the ritual takes place. At Tirumala they are filled with as many as 650 barbers and pilgrims sit cross-legged on the floor in front of them. The barbers work quickly and the hair is promptly scooped up and sold every few months by the temple authorities via e-auction. 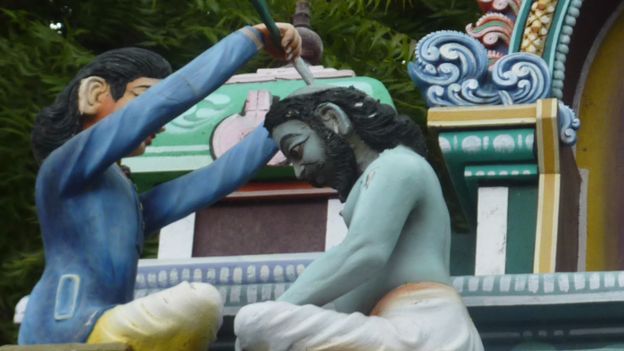 Hair from India was a staple supply for wig makers in Orthodox Jewish communities across Europe, the US and Israel – until 2004, when a delegation of rabbis from Stamford Hill, North London went to investigate whether or not the hair could be considered kosher.

“The delegation was sent by an old Lithuanian rabbi in Israel, to work out whether the hair was a religious offering or could be considered religiously neutral,” explains Tarlo.

“Even though the ritual took place outside the temple they concluded it was too muddled up with idol worship. Women were asked to burn their wigs and it caused a big crisis in the market because it cut that circuit of hair from India into the Jewish market.”

Emma Tarlo is a professor of anthropology at Goldsmiths, University of London, and the author of Entanglement, the Secret Lives of Hair. Her research was funded by the Leverhulme Trust.