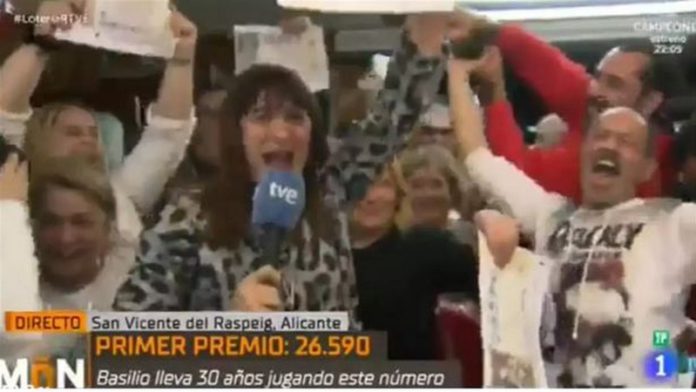 A Spanish TV reporter stunned viewers when she announced on air she had won the lottery before telling her colleagues she wouldn’t be returning to work the next day.

But there was a twist for the RTVE reporter, who quickly realised she had not scooped the jackpot millions in the Christmas draw after all.

Natalia Escudero was forced to apologise after it emerged she had actually won only €5,000 (£4,000).

The top prize for the Christmas lottery known as El Gordo (the Fat One) was €4 million (£3.4m), but the pool of cash can be shared among winners.

Ms Escudero later had to apologise to the public broadcaster’s viewers after she was accused of a lack of professionalism, reports the BBC.

Viewers criticised the reporter after her reaction gave the impression she had scooped the big prize and she appeared to suggest she would be quitting her job.

But after the broadcast, Ms Escudero reappeared on screen and mimed zipping her lips.

She later tweeted her apologies to viewers for her emotional response to the win, explained she had been overwhelmed after experiencing difficulties in her personal life in recent months.

She wrote that she had been in journalism for 25 years and she was proud of her work, saying she always reported with a “clear conscience” and calling her work “rigorous” and “proven”.

“It is sad that Natalia Escudero is today [known as] the manipulative and lying journalist from RTVE,” she tweeted.

She added apologies for any confusion her reaction may have caused, and added that it was true she was taking time off work, as she had a holiday planned.