Vice President Dr. Mahamudu Bawumia has stated that government is on track to restoring the country’s economy by stabilising the cedi and reducing inflation significantly.

According to him, the cedi, which had depreciated over the years, is gradually gaining some stability and pledged that government would continue to work to keep it stable.

“The key part of job creation is creating a vibrant private sector and making sure our cedi is stable.

“When we came it was running at 100 metres speed; we have arrested that a little and we will continue to work to keep the cedi stable. We are bringing inflation down and we will also bring interest rates down significantly,” he declared.

The vice president was addressing a durbar of chiefs and people of the Gbi Traditional Area in the Hohoe municipality of the Volta Region in honour of John Peter Amewu, for his appointment as the Minister of Lands and Natural Resources.

The performance of the cedi against some major foreign currencies, especially the dollar, has come under focus since the beginning of the year.

The cedi had depreciated against the dollar thereby prompting concerns among Ghanaians as such an occurrence has a sharp effect on the prices of goods and services in the country.

But the cedi has recovered significantly against the dollar by recording a 1.13 percent appreciation as at April 21, 2017.

Dr Bawumia indicated that the 2017 budget presented by the government is enough evidence that the president is a man of his words with regards to the promises he made prior to the 2016 general election.

He pointed out that government would be rolling out the much-talked-about ‘One District, One Factory’ project by June this year to create jobs and transform the economy.

“By June we will be rolling out the ‘One District, One Factory’ in Ghana. We want to create jobs, we want to transform the economy and so we are all going to be putting our shoulders to the wheel,” he said.

He urged Ghanaians to have faith in the government and brace themselves up for all the great things that are in the pipelines for this country.

Special Prosecutor To Be Busy

Vice President Bawumia hinted that the Special Prosecutor, when appointed by President Akufo-Addo, would be very busy this year in the fight against corruption in the country, in order to nip the canker in the bud.

According to him, the New Patriotic Party (NPP) government is not going to be tainted with corruption. 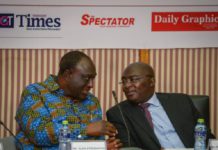