The biggest US tech firms are rallying behind the 2015 Paris climate agreement, despite President Trump’s decision to leave it.

Mr Trump’s move has been met with dismay from other world leaders signed up to the accord – but much of the outcry can be heard on the west coast of his own country.

The chief executives of Apple, Google, Microsoft and Facebook have all criticised the president’s decision.

Elon Musk, who had been a member of Mr Trump’s business panel, announced he would leave the post.

“Am departing presidential councils,” he tweeted. “Climate change is real. Leaving Paris is not good for America or the world.”

Many firms, including IBM and Amazon, said they would continue to try to meet the goals of the climate deal.

“IBM supported – and still supports – US participation in the Paris Agreement,” the technology company said in a statement.

Microsoft remained “committed” to doing its part for the agreement, its president and chief legal officer Brad Smith said.

Many tech firms have faced scrutiny from environmentalists, thanks to the huge energy demands of their data centres.

US data centres consumed roughly as much energy as six-and-a-half million US homes, according to one report – 70 billion kilowatt-hours of electricity.

Google, for example, says it is on track to hit its own goal of offsetting 100% of its data centres’ energy use against renewable power.

And Apple has said that 96% of its energy comes from renewable sources – the company is now pushing its suppliers to follow its example.

“A lot of these firms have already invested in renewables and [leaving the Paris deal] counters what they’re currently invested in,” explains analyst Matthew Ball at Canalys.

The implication is that, should it becomes less cost-effective to rely largely on renewables, then that investment could soon look like a mistake. 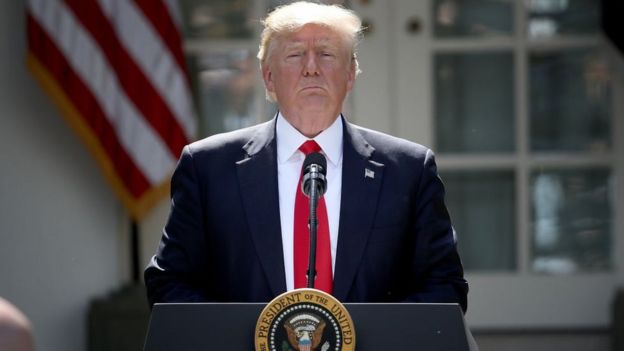 But there’s another downside for the tech giants.

“It kind of gives a sign that the US is not going to be at the forefront of the technology innovation that’s going to be required to meet the agreement’s goals,” says Mr Ball.

“It gives the edge to the European and Chinese firms.”

Getting a slice of the renewable energy market has certainly been an objective for many of America’s tech firms.

Tesla, for instance, recently announced a new product – solar panels for your roof that look uncannily like ordinary tiles.

All renewable energy resources combined account for nearly 10% of the US’s demand – but certain resources within that, including solar, have been growing rapidly according to the US Energy Information Administration.

Solar energy actually employs more US workers than Apple, Google and Facebook together, so it is perhaps unsurprising that the tech firms have expressed an interest in remaining part of the “renewable revolution”.