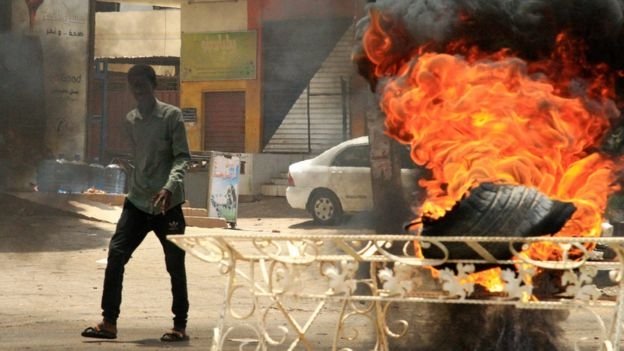 Sudan’s military have been condemned for their violent attack on protesters in the capital, Khartoum, which reportedly left at least 30 dead.

UN Secretary-General António Guterres called for an independent investigation saying he was “alarmed” by reports that officers had opened fire in a hospital.

The US said it was a “brutal attack” while the UK called it “outrageous”.

Sudan has been governed by a military council since President Omar al-Bashir was overthrown in a coup in April.

The leaders of the pro-democracy movement, who demand that a civilian government take over the running of the country, said they were stopping all contact with the Transitional Military Council (TMC) and called a general strike.

What happened at the protest sites?

The security services moved on the main protest site early on Monday, activists said, and heavy gunfire could be heard in video footage.

In a statement read on national television, the military council expressed its “sorrow for the way events escalated”, saying the operation had targeted “trouble makers and petty criminals”.

“During the execution of the campaign, large numbers of these groups took shelter in the sit-in square, which led some of the square’s officers, based on their judgment, to follow and chase them, which led to losses and injuries.”

The military, the statement added, was dedicated to protecting civilians.

Earlier, activists said the security forces had surrounded one hospital in Khartoum and had opened fire at another.

The Central Committee of Sudanese Doctors, which is close to the protesters, said 30 people – including an eight-year-old child – had been killed, and that the toll was likely to rise as not all casualties had been accounted for.

Hundreds of people had been injured, it added.

Some residents blame the notorious paramilitary unit known as the Rapid Support Forces, set up to help keep Mr Bashir in power and with roots in the Darfur conflict in western Sudan, which began in 2003.

Then known as the “janjaweed”, this militia carried out frequent massacres.

The Sudanese Professionals Association (SPA), which is spearheading nationwide protests, called for a campaign of “sweeping civil disobedience to topple the treacherous and killer military council”.

What has the reaction been?

The UN secretary general urged the Sudanese authorities to facilitate an independent investigation and to hold those responsible accountable.

“He condemns the use of force to disperse the protesters at the sit-in site and he is alarmed by reports that security forces have opened fire inside medical facilities,” a statement for Mr Guterres said.

Sudan’s state news agency said the public prosecutor had set up a committee to investigate the violence.

It is back to square one for Sudan’s political process. The hardening stances that stalled the talks between the protest groups and the TMC have been further cemented on both sides.

Expect more resolute protests and a possibly even more ruthless crackdown from the men in uniform. It is the latter who are governing right now. What matters is which faction of the security forces has the upper hand in the TMC.

The hardliners, particularly the Rapid Support Forces – led by the deputy head of the regime, Mohamed “Hemeti” Hamdan Dagalo – appear to be leading the way and could display more ruthlessness than has been seen so far.

There has been a total lockdown in Khartoum, indicating something has shifted within the regime. “People power” is taking a big hit, but protesters could be willing to take greater risks to force the military’s hand, if possible.

What is the background?

The demonstrators have been occupying the square in front of the military headquarters since 6 April, five days before Mr Bashir was overthrown.

Last month, organisers and the ruling generals announced they had agreed on the structure of a new administration and a three-year transition period to civilian rule.

But they still need to decide on the make-up of what has been called the sovereign council, which will be the highest decision-making body in the transition period.

They cannot agree on whether civilians or the military should have the majority of positions.