Award-winning Dancehall act, Stonebwoy, has flaunted his father on social media to celebrate his birthday.

Popularly known as Stonedad or GADfather, the Alakple-Anloga descent turned 75 today, May 6, and Stonebwoy has sent him some wishes.

Stonebwoy posted their photo, believed to be taken in their home, on social media to indicate how strong his father is at his platinum jubilee.

Without any lengthy caption, he proved there is an enviable bond between them, as he was captured with his hands on his father’s shoulder. 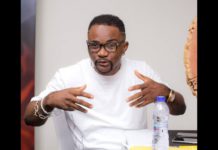