South African police have issued a “red alert” at the country’s borders for Zimbabwe’s First Lady Grace Mugabe, the police minister has said.
She is accused of hitting a 20-year-old woman over the head with an extension cord in a hotel room near Johannesburg.
Police expected Mrs Mugabe, 52, to turn herself in on Tuesday, but she failed to show up.
The first lady’s whereabouts are not known but she is believed to still be in South Africa.
Zimbabwean President Robert Mugabe is now also in the country ahead of a southern African heads of state meeting due to start on Friday.
Police Minister Fikile Mbalula said: “We, in terms of South African police, [have] already put tabs on the borders in relation to her leaving the country, so there is no question about that.
“So tabs have been put, a red alert has been put, so she is not somebody who has been running away.” 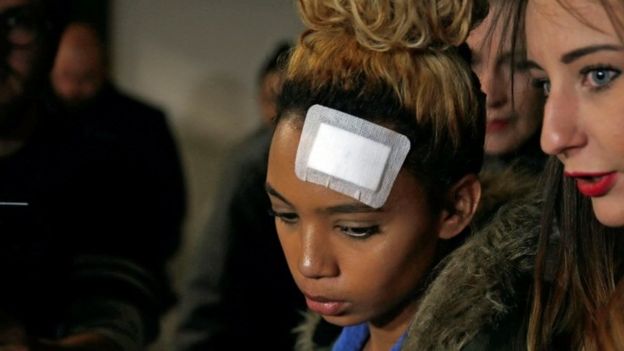 Gabriella Engels alleges that she was assaulted by Grace Mugabe
On Wednesday, South Africa’s police ministry said Zimbabwe’s government had sought diplomatic immunity for Mrs Mugabe.
Meanwhile, South African lawyer Gerrie Nel, who successfully prosecuted Paralympic athlete Oscar Pistorius, is supporting the woman making the allegation, Gabriella Engels.
Mr Nel is now working with the Afriforum group, which mainly lobbies for the rights of Afrikaners in South Africa.
Afriforum said if the police failed to act in the case then it would take up a private prosecution.
It also said that it would fight any move to grant Mrs Mugabe diplomatic immunity.

Farouk Chothia, BBC Africa
South Africa’s government risks a public backlash if it lets Mrs Mugabe go scot-free.
This happened in 2015, when it failed to execute an international arrest warrant for Sudan’s President Omar al-Bashir who was wanted by the International Criminal Court.
The government argued that he qualified for diplomatic immunity, but the country’s judges disagreed. The government was then strongly criticised for undermining the rule of law.
It seems that ministers want to avoid a similar backlash and are therefore insisting that Mrs Mugabe must appear in court.
But by taking such an approach it risks a diplomatic row with Zimbabwe’s government – a staunch ally whom it has resolutely defended over the years, despite international criticism of President Mugabe’s human rights record.
So the two governments, including Mr Mugabe and his South African counterpart, Jacob Zuma, are bound to be in talks to resolve the crisis over the first lady.
One option being mentioned in the South African media is that Mrs Mugabe should plead guilty during a short court appearance, and pay a fine.
But it is unclear whether Mr and Mrs Mugabe – known for their uncompromising nature – will agree to this, especially after Zimbabwe’s ruling Zanu-PF party said in a tweet on Tuesday that the first lady had been “attacked”, contradicting her accuser’s version of events.