President Akufo-Addo has paid glowing tribute to eminent Ghanaians who lost their lives in the year 2018.

Addressing Parliament at the 2019 State of the Nation Address, he said “may the soul of the departed find rest in the bosom of the maker until we meet again.

Special mentioning was made of the former Vice President, Kwasi Bekoe Amissah Arthur, former Secretary General of the United Nations, Mr. Kofi Annan and Mr. K B Asante, a distinguished statesman and a patriot.

The President’s third State of the Nation Address (SONA) to Parliament on Thursday is expected to focus on key economic successes chalked since he assumed power in 2017.

The annual address is in accordance with Article 67 of the 1992 Constitution of Ghana which states: “The President shall, at the beginning of each session of Parliament and before the dissolution of Parliament, deliver a message on the state of the nation.” 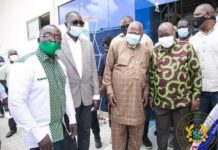