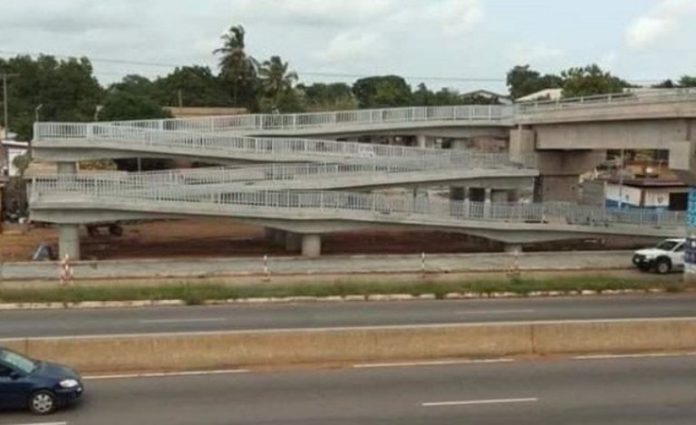 The Madina-Adentan footbridges have recorded a massive increase in usage following the intervention of military personnel this week.

The military personnel stormed the area after another pedestrian was knocked down by a speeding vehicle while trying to cross the road three days ago.

Over 50 pedestrians were arrested last month by the Madina Police for failure to use the facility.

Authorities awarded construction of the footbridges in November 2018 following series of protests as a result of the high death toll of road users knocked down on the stretch.

However, after its completion, residents still refused to use the footbridges citing its long zigzagged path till the military arrived.

Residents told Joy News’ Piesie Nana Yaw Gyimah Friday, that they were happy the soldiers were brought in to enforce the law.

A pedestrian, who only gave his name as Mantey, attributed the behaviour to sheer indiscipline and applauded the military in getting the pedestrians to do the right thing.

“When the cars were knocking down people we asked for the bridge to be constructed, and since that has been done, no matter how it looks like, we must use it”, he said.

However, another pedestrian expressed displeasure about the bridge saying it is too long, making it laborious to use and called on the government to do something about it.

“If I were to rate the construction of this footbridge, I will only give it 40 per cent because it is very bad. To go around all these steps before finally descending leaves much to be desired.

“Also, there is no light on it making it risky to use in the evening. I don’t think it’s good. They have to do something about it,” the resident said.

Though the military may have succeeded in getting people to use the bridge, some residents say when they (the soldiers) leave the scene, pedestrians will return to the street.

Some residents have, therefore, called for a permanent solution to get the pedestrians off the road.