Nollywood actress, Cossy Orjiakor, is seriously gracing various movie locations these days and it seems Baba God has picked up her call as she has been very busy.

The actress is currently on set of a movie produced by Zeb Ejiro, where she is playing the role of a house maid along with Bukky wright who happens to be her boss.

Playing such role has left the actress with no choice but to package her enormous bossom well to sooth the producer and director’s taste.

Anyways, she is not complaining but happy to work with Zeb as she recalled working with his brother, Chico Ejiro, in the movie ‘Itohan’ which almost ended her career.

In her words, “Finally, am working with the Mr Zeb Ejiro, The REFORMER. Hmmmmm am super excited. Hmmm the last time I worked with Chico Ejiro was the Itohan.

Where my imagine and my career almost got ruined because of the dog scene in that movie. It actually made me who I am today. Because this cossy don’t give a 2fk, that’s me. Chioma house  girl with my madam. Bukky Wright.” 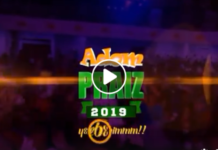 PHOTOS+VIDEO: All set for 2017 Adom Praiz

Sarkodie will marry but not on June 17; Rapper’s mum curtails rumours

Dumelo cools off in South Africa amidst threats of prosecution