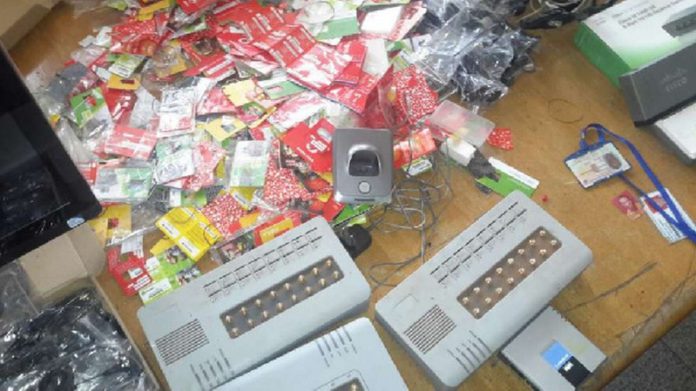 The state is losing more than GH¢3 million a month to an illegal scheme that diverts international calls into local ones, according to the Ghana Chamber of Telecommunications.

Known as sim box fraud, the illegality is perpetrated by Ghanaians and their international partners who route international calls through the Internet and terminate them on local mobile phone numbers to attract local charges.

Beyond the monthly losses, activities of the fraudsters have also led to a decline in International Direct Dialling (IDD) revenue from as high as GH¢222 million in 2012 to about GH¢56 million, which is projected for the end of 2019, a 74 per cent reduction.

The Chief Executive Officer (CEO) of the Ghana Chamber of Telecommunications, Mr Kenneth Ashigbey, who made this known to the Daily Graphic in an interview, said the fraudsters were now employing newer and more improved technologies to help mask their locations and make it difficult to trace their whereabouts.

He said although the telecom companies (telcos) had blocked about 70,000 SIM cards since January this year, they had also identified a number of new schemes employed by the fraudsters to perpetrate the illegality.

They included bypass, CLI masking and number refilling, both of which had the same effects as SIM box fraud.

“In CLI masking, the offending operator manipulates the calling party number to make it look as if it were a local call,” Mr Ashigbey explained.

That means that telecom operators in the country would not be able to bill the appropriate rate for such transactions, he said, adding that the difference then went to the fraudsters through their international counterparts.

As a result, Mr Ashigbey said, some of the telcos had also adopted advanced technology to ruthlessly deal with the emerging phenomenon.

“Our members have to ensure that we are also ahead of the curve, so that we can arrest these fraudsters, but it requires investments in new technologies, systems and processes to counter the fraudsters,” he said.

Asked why the illegality persisted and how it could be resolved, he said as an industry, the chamber had always advocated the removal of the surcharge on incoming international traffic (SIIT).

That was because the fraudsters were currently leveraging and exploiting the arbitrage between the international rate of 19 cents and local rate of 10Gp per minute.

“We have made presentations to the government on the issue on several occasions and are still engaged to ensure that we deal with the issue.

“Within this much liberalised economy, we should remove the $0.19 on all international incoming minutes and allow the market to determine the tariff. We need to take out the arbitrage that currently exists,” he said.

On the role of the police in clamping down on such fraudsters, the Head of the Cyber Crime Unit of the Ghana Police Service, Dr Gustav Yankson, told the Daily Graphic that although there was an alarming surge in the activities of the fraudsters, a joint effort by the Cyber Crime Unit and the Telecommunications Chamber had resulted in a series of operations to round up the criminals in different locations in Accra.

Within the last two weeks, he said, the joint effort had resulted in raids at different locations within Accra, in the course of which four adults were arrested, while two others were on the run.

All the arrests were made in suburbs of Accra, including Alhaji Tabora, Nungua, Awudome Estates and Mamprobi.

Although the police did not give the names of the arrested suspects, Daily Graphic checks revealed the identities of the suspects as Comfort Dede, arrested at Korle Gonno, Emmanuel Nii Tagoe, arrested at Awudome Estate.

The rest are Mallam Bako and Defence Doh, both arrested at Alhaji Tabora, and Richard Wils Kobby, who was arrested at Nungua.

In all, five SIM boxes, each loaded with a minimum of 100 SIM cards, were retrieved from the fraudsters.

Asked what would be the fate of the suspects, Dr Yankson said the police were conducting further investigations, after which the suspects would be arraigned.

He explained that due to the fact that the suspects would be charged with fraud, the police needed to ascertain how much their activities had cost the state as of the time they were arrested before they would be put before court.

Dr Yankson sounded a caution to individuals indulging in such illegal activities to desist from them, as the police would find them.

“We are able to track them real time and, per the law, they can face up to 25 years’ imprisonment,” he said.