An 18-year-old Senior High School (SHS) student, Illiasu Fuseini, has been stabbed to death by a colleague at Anyinam Obuasi in the Ashanti Region.

According to him, the deceased and other young boys went to a pub at Anyinam, a suburb of Obuasi on the said day.

Amidst the fan moment, a confrontation broke out between Fuseini’s friends and another group during which he was stabbed, leading to his death.

The suspects, he said, fled the scene after committing the crime.

ASP Akenten said the body has since been released to the family for burial after post mortem examination while the police are on a manhunt for the culprits. 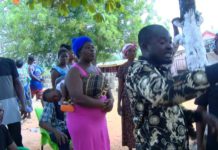