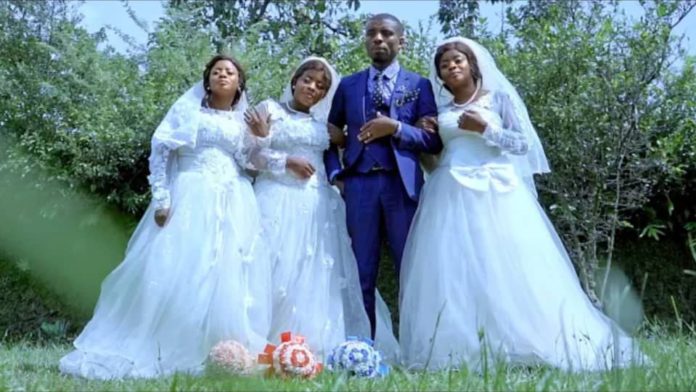 A man’s quest to make history in the area of polygamy in Congo has got him in an entanglement with triplets.

The 42-year-old Wizzo said he wants his name to be etched as the first man in the Republic to have the balls to marry three sisters, better still, triplets.

Aside that, his wedding with the triplets named Natacha, Natalie and Nadege is his personal trophy and a history he has made in his life.

He called on media men to capture his wedding on nationwide Afrimax TV as an announcement of his record.

On how he landed the mega deal, Wizzo narrated that at the time he met Natalie on social media, he did not know she was a triplet.

He said he fell in love with her charisma and they soon began online dating. Since he is a traveler, he said it took months for their first face-to-face meeting.

Unbeknownst to Wizzo, the lady who received him at her house on the first meeting was not Natalie, but her elder sister Natacha.

She played along so well, such that the loverboy had no idea he was with an imposter, even continuing the secret relationship after he had traveled back.

He continued that Natalie found out, but for the bond the sisters have, they decided to all test their fate.

And that was how Nalege was the one who welcomed Wizzo on the subsequent visit. The rotation continued for months until they decided to confess to their shared boyfriend.

Wizzo stated that he was dumbfounded when he was let in on the secret, but since he had fallen in love with all three, he decided to maintain the relationships.

“It feels like I love only one person because their beauty and character are the same.”

Though his parents are not in support, Wizzo could care less as he does not want to be a victim of African culture.

He stated on his wedding day, ” I know some people are not happy for me but you can’t please everyone. I don’t know if my parents will attend, but I know it’s going to be a special day”.

His three brides lined up at the aisle with their bridesmaid, as they waited in anticipation for the vows session.

Afterwards, Wizzo waved the three rings at the solemn guests, before proceeding to kiss his wives one after the other amid jubilation.

Speaking after the wedding, the triplets expressed excitement, stating “we are very happy that we were not separated by husbands. This is a dream come true, God heard our prayers.”

Though they did not speak on their sexual life, they said they are coping beautifully. 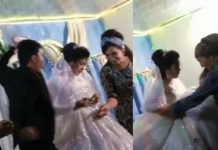 Jubilation as woman ties the knot at age 52 [Video] 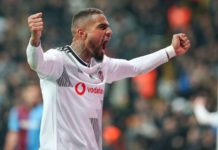