Dancehall King, Shatta Wale, has reaffirmed his position as an artiste for the streets in a latest video.

Shatta made showers of cash rain on some fans who accosted him and his team while plying the Ada route.

Upon sighting his convoy, the fans blocked the road and surrounded his cars in a bid to receive the recognition they deserve.

Faced with the reality that he will not be left to drive off, the Amount hitmaker did the needful. He stood out from the open-top section of his four-wheel drive and threw some notes into the air.

The elated fans scrambled to pick up some cash while others climbed on top of his car for more.

It took the collective efforts of his personal assistant and bodyguards to shield Shatta Wale and his car from the mob.

Posting the moment on his social media platform, Shatta Wale stated that his fans play a pivotal role in his music, and for that, he will forever put a smile on their faces.

He posted: “We are made by the fans. We are shaped by the fans. The fans make the music. The fans grow the brand. We need not be billionaires to show them love when we can. Whatever little we have, could bring a smile! Shouts to the SM massive in Ada.” 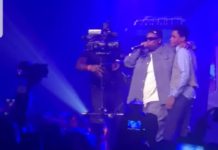