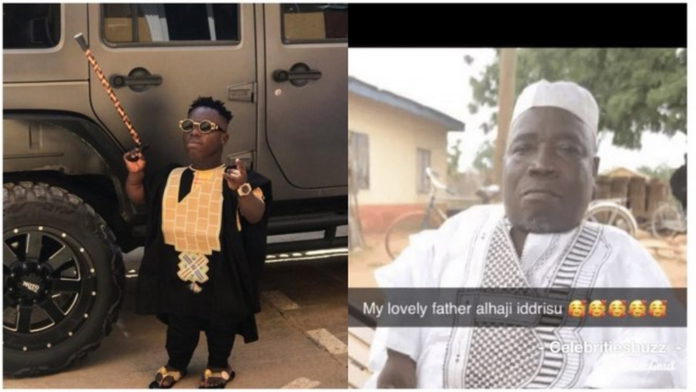 Popular social media billionaire, Shatta bandle has, for the first time, revealed the identity of his father.

Firdaus Idrissu, Shatta Bandle’s real name, was born in Karaga, a small town in the Northern Region of Ghana, posted the photo with the title, “my real father alhaji iddrisu”.

The photo shows a striking resemblance between Shatta Bandle and the man, Alhaji Iddrisu.

The diminutive internet sensation turned famous in Ghana and Nigeria last year with his viral antics of claiming to be richer than Aliko Dangote, who is currently the richest black man alive.

Shatta Bandle has shown us all his properties, ranging from mansions, luxury cars to pieces of jewelry and finally, we are getting to see the father of the young man who claims to be Ghana’s youngest billionaire.

Though many know his claims do not reflect what is in his pocket, his braggadocious social media lifestyle comes off as a comedy to many and that has won him over half a million fans on Instagram.

In the early hours of Friday, he shared the photo of his daddy on social media to celebrate him with blushing emojis.