Buried in the bustling Tema Station, Accra’s hub of urban and inter-city commercial transport, is a self-taught make-up artist, Daniel Amu, who attends to many women daily.
Not many people may have the time or skill to cater for their beauty needs each day, so Daniel’s services come in handy for these women, and some men, who want to look extra polished as they go about their daily activities.
It was around midday on a typical weekday when citifmonline run into Daniel’s modest set-up in the Tema Station, comprising a pair of chairs and his make-up products on display, all under the shade of an umbrella.
He was carefully trimming the eyebrows of a customer.
The human traffic at the Tema Station makes it the ideal location for vendors of wares ranging from plastic merchandise, electronics, phones, DVDs and even medication of all kinds. 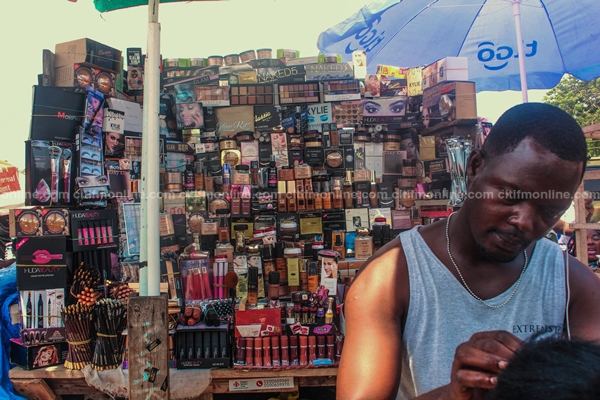 Daniel started off at the Tema Station just selling make-up products sometime in 2012, after previously working as a barber. He had no training in the line of work he now derives satisfaction from.
Without delving into details, he recounted that “the place I used to work, they sacked us from there so I got a place here [in the Tema Station] to start selling the make-up.”
“One day, I realized that when the ladies come and buy makeup, they ask: ‘we want to [shape] our eyebrows’ so I decided to start doing it for them.”
His line of work visibly surprised some passer-bys, mostly men, who stopped to stare at a man who made a living selling make-up and grooming ladies faces. 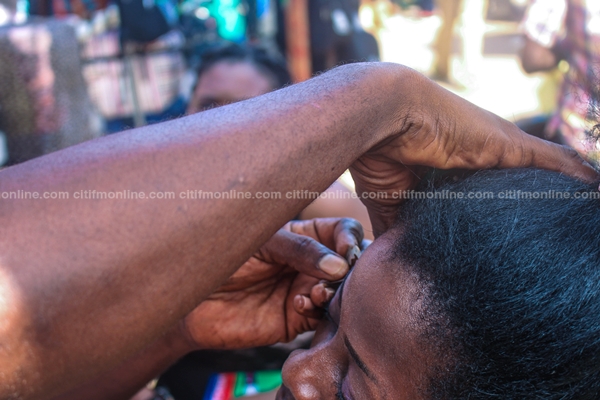 Though Daniel’s work is mostly patronized by women, he said some men also come to have their eyebrows shaped.
“Sometimes I can do about 10 people, for the men – young guys and so on. But for the women in particular, it is uncountable,” he said.
Daniel’s work as a make-up artist occasionally also extends to special bridal assignments which bring significantly more money. He recalled that he has done some work for three brides in 2017.
“I do bridal makeup [in addition to the] normal makeup. At times I get contracts and I go and do the makeup for them. For the normal makeup, it costs GHc 30, but when they come, I reduce the price and do it for them at GHc 20. For the bridal make-up’s cost, I charge GHc 600 and GHc 500 unless I want to consider the person and it also depends on where the person is.” 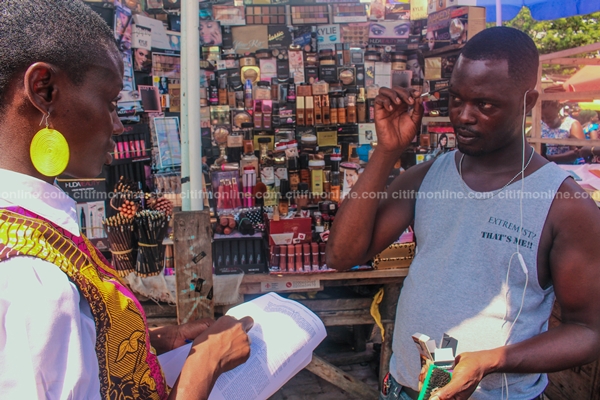 During the short interaction with Daniel, it became clear that he was adequately aware of the nuances of make-up application and products, as he knows what tips to offer on the right product to match a particular hair style and skin tone.
Losing his job as barber five years ago, may have been tough for him, but the make-up and grooming job he has now, is undoubtedly an upgrade from being a barber, Daniel said.
“I really love the business,” he stated with smiles.