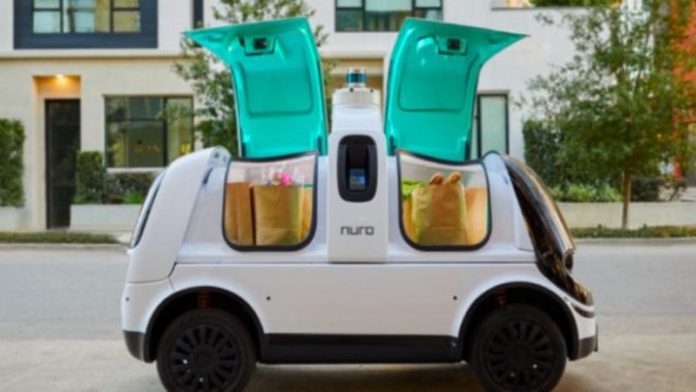 The first self-driving vehicle designed without basic human controls such as steering wheels, pedals or side view mirrors has been granted permission to test on US roads.

Nuro, the company behind the design, makes autonomous delivery vans.

The vehicle is Nuro’s second generation of its vehicles, which it is calling R2 and will be tested in Houston, Texas.

This is the first exemption to a rule requiring vehicles to have controls for human operators.

Most of the rules for testing vehicles require features that allow a driver to safely take control of them.

But in a statement, the US transport secretary Elaine Chao said given that the vehicle’s top speed is capped at 25mph, these requirements “no longer make sense”.

The Department of Transportation (DoT) will also be enforcing greater oversight of the testing.

It will require Nuro to report information about the operation of the R2 and reach out to the communities where the vehicle will be tested.

In a blog post, Nuro’s co-founder Dave Ferguson said the decision was a “milestone for the industry”.

“Moving forward, we must modernize the existing regulations that never envisioned a vehicle without a driver or occupants, and everyone in the industry must work to ensure self-driving technology is tested and deployed in the safest possible vehicles,” he wrote.

General Motors has also requested an exemption to test its self-driving Chevy Bolt.

DoT has not yet announced its decision for the firm’s request. The Bolt does however have a higher top speed than Nuro’s R2 vehicle.

Nuro’s vehicles are designed to operate without a driver or passengers in them.

In its R2 design, the company removed the side view mirrors and windscreens.

It will also keep the rear view camera running at all times. This is not permitted without an exemption from the DoT, as the camera could distract human drivers.

The vehicle has an egg-shaped frame that is smaller than most cars in the US. It also has two temperature-controlled compartments for deliveries. Doors raise up to reveal the items once a code has been entered by the recipient.

The R2 uses radar, thermal imaging and 360-degree cameras to direct its movement.

Nuro has announced the R2 will deliver pizza for Domino’s Pizza, groceries from supermarket chain Kroger and goods for Walmart, during its Huston trial.

During the testing of its initial R1 design, the firm made deliveries for Kroger in Scottsdale, Arizona.

Nuro was founded by two former Google engineers and it has funding from Japanese firm Softbank.