Residents of Salaga North constituency in the Northern Region are in dire need of police protection following recent armed robbery attacks there which have residents in fear.

The lack of police presence in the area is posing threat to the lives of over thirty thousand people.

As Ghana strives to meet the UN policing standard of one police officer to five hundred people, the situation for the sixty-five communities in the Salaga North Constituency is critical. The constituency is within the East Gonja District, about one hundred and ten kilometres drive from Tamale.

Here, crop production and animal rearing are the main source of livelihood for the over thirty thousand residents. The last community that connects Salaga north to Tamale South constituency is about one hour forty minutes drive. With no single police check point on the road, residents and commuters are exposed to danger.

Last year, four armed robbery cases were recorded in homes and the robbers left scars. Fifty-three year Mma Memunatu Limpo is still nursing her amputated left limp, whilst Baba Yakubu nurses a shot in the abdomen which has left him passing urine in a tube after a robbery attack at their residence.

Mma Memunatu Limpo recalled, “ I was shot several times in my left limp when I attempted to hide with the little boy who was crying, my son and older grandson were held at gun point at that time, I knew I was losing them but at least I could escape with the little one from harm”.

For Baba Yakubu, “five men appeared from nowhere that fateful night when we were sleeping in the compound, at gun point, one demanded for the money which we replied we didn’t have. At once there was a command to shoot and that was when I realized we could get killed so I tried defending myself by pushing the gunman but he shot at my abdomen.”

An eyewitness Baba Abdulai also recounts: “We have recorded four robbery attacks here, the robbery usually happens on the bad roads and in our homes but the most recent one which happened last month involved a worker of the Engineer and Planners. We want police presence to curb this situation”.

Alhaji Alhassan Mumuni is the Member of Parliament for the area, and also a deputy ranking member on the Defense and Interior Sub-Committee of parliament. He noted that efforts to get the police to take over a police post constructed in 2011 have been futile. This police post and its staff bungalow have been left to waste whilst residents continue to live in fear.

“I reported this issue to the then IGP Alhassan after all efforts to get the regional command to act failed, he also promised to get his men here but nothing happened. In this age where Ghana is close to meeting the US acceptable benchmark of policing and we do not have even a single resident police officer in the entire constituency”. 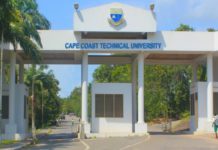