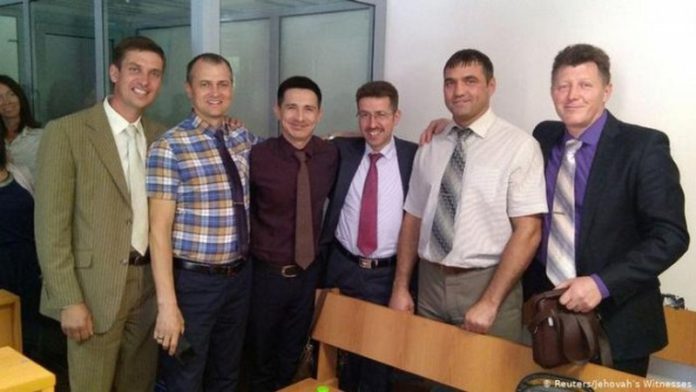 A Russian court has sentenced six Jehovah’s Witnesses to jail for belonging to an “extremist organization” in the western city of Satatov. Since 2017 the movement founded in the USA has been outlawed in Russia.

Saratov’s regional court imposed jail terms of two up to three-and-half years on the six Jehovah’s Witnesses on Thursday after finding them “guilty” of continuing activities, according to multiple news agency reports Friday. The six were also barred from holding leadership positions for five years.

In 2017 Russia’s Supreme Court outlawed the reclusive Christian-oriented movement, which reportedly has 170,000 followers in Russia and 8 million worldwide.

Russia’s Orthodox Church, which is allied with President Vladimir Putin, had cast Jehovah’s Witnesses — who reject military service and blood transfusions — as belonging to a foreign sect that erodes state institutions.

Putin himself reportedly said that movement members should not be seen as terrorists.

Thursday’s jailings followed the conviction and jailing for six years of a Danish individual in Russia for his association with Jehovah’s Witnesses last May.

Over 250 in Russia are facing criminal charges, with 41 in detention and 23 under house arrest, according to the movement.

Lawyers for the six planned to appeal the sentences, said Jarrod Lopes, a US-based spokesman for the group.

The jailings were fallaciously based on the thesis that faith in God was “a continuation” of extremist activities, said Lopes, adding that the six, quoting from the Bible, had told the court they harbored no animosity.

Those convicted, all men, had been jailed for nothing, said Rachel Denber of the US-based Human Rights Watch.