The Royal Family has thanked those who travelled to Windsor for the wedding of Prince Harry and Meghan Markle.

Thousands of people lined the streets to see the couple on their big day, with many more watching the ceremony on television around the globe.

The wedding celebrations ended with a black-tie dinner and fireworks display at Frogmore House, near Windsor Castle.

The couple is not expected to leave for their honeymoon immediately, choosing instead to remain in the UK before taking a break.

As a wedding gift, Prince Harry gave his bride an emerald-cut aquamarine ring which had belonged to his late mother – Diana, Princess of Wales.

The Royal Family’s twitter account posted a message of thanks to those who followed the wedding from the UK, the Commonwealth and around the world.

The newlyweds – now to be known as the Duke and Duchess of Sussex – spent the night at Windsor Castle.

Meghan has previously said she wants to “hit the ground running” on becoming a full-time royal. 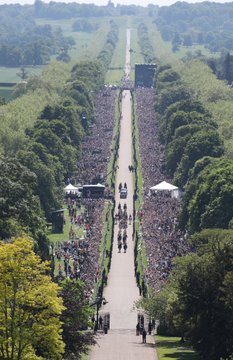 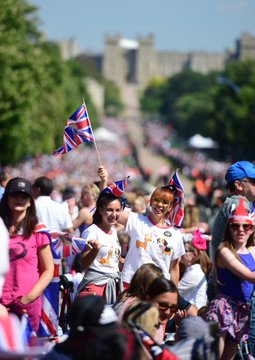 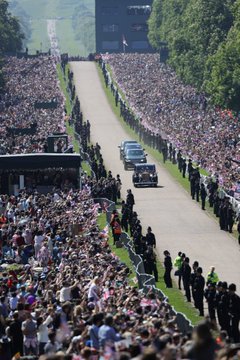 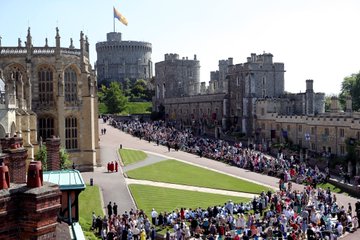 Thank you to everyone who came to Windsor and those who followed from around the UK, the Commonwealth, and the world today. Congratulations once again to the newly-married Duke and Duchess of Sussex. #royalwedding

On Tuesday Meghan will attend her first royal garden party in the grounds of Buckingham Palace when the couple attend a 70th birthday patronage celebration for the Prince of Wales.

This will be their first official engagement as man and wife.

The prince and his bride exchanged vows and rings before the Queen and 600 guests at St George’s Chapel, Windsor Castle, on Saturday.

“You look amazing,” Prince Harry told Ms Markle after she walked down the aisle in a white boat-neck dress by British designer Clare Waight Keller.

Prince Harry himself was given special permission from the Queen to keep his short beard as it is customary to be clean-shaven when dressed in Army uniform.

Large crowds turned out in bright sunshine to see them driven around Windsor in a horse-drawn carriage.

Guests at the wedding included Oprah Winfrey, George and Amal Clooney, David and Victoria Beckham and Sir Elton John, who later performed at the wedding reception.

Prince George and Princess Charlotte were among the 10 young bridesmaids and pageboys.

Prince Charles walked Ms Markle down the aisle, after her father, Thomas, was unable to attend for health reasons.

The wedding service combined British tradition with modernity and the bride’s African-American heritage.

The Most Rev Bishop Michael Curry, president of the US Episcopal Church, gave an address, the Rt Rev David Conner, Dean of Windsor, conducted the service and the Archbishop of Canterbury, the Most Rev Justin Welby, officiated.

In a passionate speech, Bishop Curry – who was invited to speak by Ms Markle – referenced the African-American spiritual song Down by the Riverside, which was sung by slaves, and when he realised he had gone on too long, he told his audience he had better wrap up as “we gotta get you all married!”

Speaking afterwards, Bishop Curry said it was “a joyful thing” to see diversity in the ceremony.

Karen Gibson and the Kingdom Choir performed Ben E King’s soul classic Stand By Me during the service.

He was accompanied by musicians from the BBC National Orchestra of Wales, the English Chamber Orchestra and the Philharmonia.

The gospel choir also performed Etta James’ uplifting version of Amen/This Little Light of Mine as the newlyweds left the chapel.

All 600 guests were invited to a lunchtime reception at St George’s Hall, hosted by the Queen. The best man, the Duke of Cambridge, acted as compere.

Badu Bonsu II; The King whose head was preserved in a...