Founder and Leader of the All People’s Congress Party (APC), Hassan Ayariga has lambasted the incumbent New Patriotic Party (NPP) for the implementation of the Representation of the People Amendment Act also known as the ROPAA law, 2006 [Act 699] as ordered by the court.
According to him, it is part of the grand scheme to retain President Akufo-Addo in power.
His comment follows an Accra High Court ruling ordering the Electoral Commission (EC) to implement the controversial law passed in 2005.
In a judgement delivered Monday, the Court presided over by Mr Justice Anthony Yeboah, said the 12 months grace period starts from January 1, 2018, and it is to enable Ghanaians in the diaspora to vote in the 2020 elections.
But according to Dr. Hassan Ayariga, the ROPAA law is a deliberate move by the NPP government to win the 2020 elections hands down.
According to him, he believes the law will bring extra challenges that will lead the country to a standstill because there are no accurate, precise and concise database on the number of registered voters abroad.
With this, he believes the Akufo-Addo-Bawumia government is implementing this law as a strategy to stay in power perpetually.
“Do we have a database in this country that we can say we have 27 million Ghanaians with those legible to vote? We cannot determine who a Ghanaian is. It’s a problem. Let’s put an accurate database system to give us the number of Ghanaians in the country and abroad. It’s a ploy. Once Madam Charlotte Osei is out the NPP will bring in their new madam Charlotte Osei and they will be in power forever…”
“If they bring a register of 10 million Ghanaians abroad can you challenge them? The polling stations will be more than the ones we have here. Do we have the money or the people? It’s just a ploy to steal votes. They should come down to vote until we put proper structures in place so we can know the actual number so when the voting is over it will tally with the ones we have in our records…”
“China is 8 hours ahead of us. How would we collate those in different countries? How do we intend to do that? The court is for the people of Ghana to see justice; we are citizens, not spectators…” Hassan Ayariga maintained on Accra based Okay FM.
Source: Adomonline.com/Dennis Kofi Adu 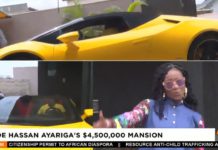