A$AP Rocky was reportedly arrested at LAX airport on Wednesday in connection with an alleged shooting.

The 33-year-old rapper had just returned from a holiday in Barbados, where he was joined by pregnant girlfriend Rihanna, when police reportedly took him into custody at the Los Angeles airport.

Rocky’s lawyer, Alan Jackson, is said to have confirmed that the arrest was in relation to a shooting in November 2021.

The rapper, real name Rakim Mayers, had been under investigation by the Los Angeles Police Department but this had not been public knowledge, it has been reported.

The incident is said to have taken place on November 6 near Vista Del Mar and Selma Ave at around 10:20pm.

According to NBC News, the victim – who survived the shooting – allegedly told police that Rocky approached him with a gun in the street where the musician was reportedly accompanied by two others.

The man claims Rocky shot at him up to four times and that one of the bullets grazed his left hand.

LAPD are said to have made the arrest with assistance from Immigration and Customs Enforcement’s Homeland Security Investigations team.

The arrest came hours after Rocky had enjoyed a beach holiday with girlfriend Rihanna, 34, in the singer’s native country Barbados.

They are expecting their first child together having announced Rihanna’s pregnancy in February. The We Found Love singer is due to give birth this spring.

However, the couple’s relationship has been under scrutiny in recent days following claims that Rocky had cheated on Rihanna causing them to split.

Rumours mounted on social media that Rocky had been romantically involved with shoe designer Amina Muaddi, but she soon shut down the reports.

In an Instagram post, she wrote: ‘I’ve always believed that an unfounded lie spread on social media doesn’t deserve any response or clarification, especially one that is so vile. 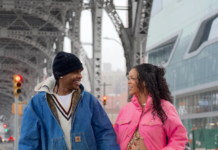 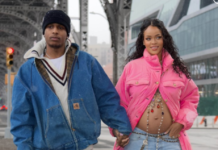