President Nana Addo Dankwa Akufo-Addo made a historic visit to Park Agrotech Ghana Limited, an emerging company in the supply of day-old chicks located at Apedwa in the Eastern Region on December 22, last year.
The momentous event, which formed part of the President’s tour of the Eastern Region, saw him interact with the workers at the company’s feed mill.
Undoubtedly, the President’s visit to the facility sent a strong signal about the government’s commitment to partner the private sector to revive the country’s ailing poultry industry. This is refreshing, especially when there is the urgent need to bridge the gap between the increasing demand for chicken as against the decreasing supply of the product.
From the soup pot of the kitchen at home to that of the local “chop bar” operator to the restaurant, one is sure to find chicken topping the list of meat, giving an indication that it is the delicacy of the masses. Packed foods such as jollof rice, rice and beans (popularly called waakye), fried rice, are incomplete without chicken parts such as the thigh, wing, neck or the breast plate. 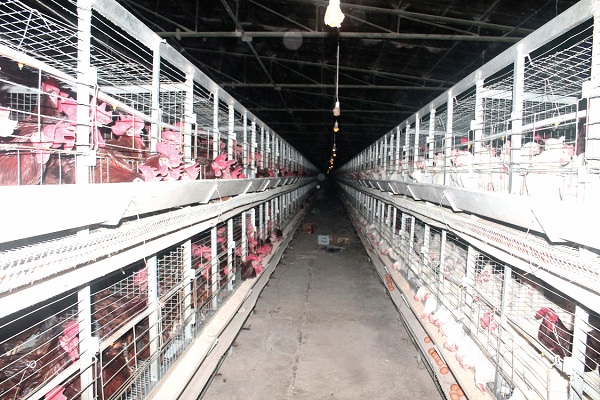 Some parent birds in the poultry farm where eggs are produced

A United States Agency for International Development (USAID) survey published in April 2017, revealed that Ghanaians consumed more than two million local bred chickens last year. A Daily Graphic report of September 1, last year, also stated that Ghana’s poultry imports from the United States (US) increased from 38,000 metric tons in 2015 to 41,000 tons in 2016.
The publication cited the USA Poultry and Egg Export Council (USAPEC) Regional Director for Sub-Saharan Africa, Ms Zelda Sharp, as saying that the council had joined forces with the Ghana National Association of Poultry Farmers (GNAPF) to increase poultry consumption in the country.
These figures paint a clear picture of the fact that while poultry is increasingly becoming a delicacy in the country, there is also an insatiable drive to import the delicacy. This gives an indication that the local poultry industry is not robust enough to satisfy the taste and consumption capacity of the public.
Experts say that access to quality day-old chicks serve as one of the critical pillars on which a robust poultry industry rests. The source of the parent birds, the reputation of the hatchery, the history of the breeder’s farm, as well as farm management practices by poultry farmers have a real impact on how well day-old chicks will perform.
When the source of the parent birds is credible, the breeder’s farm is unblemished, the hatchery is of unquestionable standard, then the poultry farmer on the other side of the equation owe it a duty to adhere strictly to efficient management practices to ensure that mortality is reduced.

One of the bio-security systems at the entrance to the poultry farm
Park Agrotech Ghana Limited is one of the few companies in the country that has adhered to high technical and managerial skills in the production of quality day-old chicks using modern technology.
With its efficient bio-security systems and better operational mechanisms, the company, which started operating barely a year, has become a household name among industry players.
At the main poultry farm which houses 21,000 birds, up-to-speed operational systems and technologies are used to produce quality eggs for the hatchery.
During a recent tour of the facility, my sense organs were activated as I was conducted around the poultry farm by its Manager, Dr Vighane Balasheb.
The cockerels that had been confined to one side of the farm watched on jealously as their counterparts mingled with the layers on the other side to make sure that they produced good quality eggs. I watched closely as the Automatic Egg Collection machine moved the eggs gently to the point of collection.
Records at the farm show that 18,480 quality eggs are produced in a day from the birds which are imported from world- acclaimed sources such as Lohomon and Novogen in Germany and France respectively.

Mr Shesh Kanta (middle), Hatchery Manager, speaking to Timothy Ngnenbe about the egg grading and how it works.
The next port of call was the hatchery where the manager of that facility, Mr Shesh Kanta, led the team as we moved from one point to the other. We went to the fumigation chamber where the eggs collected from the poultry farm were taken through rigorous mechanisms to cure them of any infestations before they were processed for incubation.
Inside the hatchery was the Automatic Egg Grading Machine, a device that helped to segregate the eggs according to weight to determine which of them would pass for the incubator.
“You see, the machine is able to separate the eggs according to their weight so we are able to take out eggs which weigh below 55 grams or above 68 grams. The eggs which meet the standards are taken to the cold room to maintain the required temperature before they are sent to the incubators. For the eggs that fail to make the mark, we sell them,” he explained.
From the cold room, the eggs are taken to the incubation room where they are kept under regulated temperature for 19 days before they are moved to the hatchery to be hatched into day-old chicks in two days.
Records at the hatchery show that 100,000 day-old chicks made up of 50,000 each of cockerels and layers are hatched in a week.
“Before we offer any of the day-old chicks for sale, we ensure that they meet the above requirements and this is the reason why the almost 400 poultry farmers who take their supplies from us and adhere to the right farm management practices have success stories to tell,” Mr Kanta said.

Some of the hatched chicks
The company’s feed mill produces poultry feed in various forms not only to feed its birds but to meet the demand of poultry farmers. The Manager of the Feed Mill, Mr Ankit Kumar, disclosed that the company had put in place all the infrastructural arrangements and technologies required to supply feed on a large scale to farmers.
“We are only waiting for the Food and Drugs Authority (FDA) to give us the right certification and approval to commence commercial supply of these poultry feed to farmers,” he added.
In the government’s quest to move the country beyond aid, it is important to take a look at the poultry sector by encouraging public-private partnerships (PPP) to increase poultry production. It is equally important to invest in the poultry sub-sector to reduce the importation of chicken. That way, the local poultry farmer will not only be empowered economically, but the sector will also contribute significantly to the growth of the local economy.