The blockage led to heavy traffic as school buses, and private and commercial vehicles were stranded.

It took the intervention of the armed police to clear the road after an hour of the protest.

The protestors accused the Member of Parliament (MP) for New Juaben South Michael Okyere Baafi and Vice President Dr Mahamadu Bawumia of deceiving them with night sod-cutting on October 27, 2020, under the guise of awarding the road on contract for construction with alacrity.

The 10.5 kilometer road was expected to be completed in 18 months.

However, two years after the sod-cutting, the road has been abandoned.

The deplorable condition of the road continues to worsen with the heavy downpour.

The concrete bridge reconstructed on the road has been washed away making it not motorable, hence a bypass has been created for use by vehicles to and fro the community.

The situation has led to exorbitant transportation fares by few commercial vehicles that commute to Nyamekrom community and its surrounding farming communities.

Addressing the media, the convener of the protestors, Desmond Ameyaw, said the deplorable road to the community is retarding development and worsening the poor living standards of the people, particularly drivers and farmers.

“We the concerned citizens of Nyamekrom in Koforidua write to express our grievance and disappointment in your government for failing to honour your campaign promises as far as our road is concerned. The present Member of Parliament Hon. Michael Okyere Baafi in his campaign promises assured that the good people of Nyamekrom if we vote for him and he comes to power he will lobby for the road to be constructed.

“After mounting pressure on the MP and the MCE we were made to understand that this road has been awarded to Cocobod and categorized as cocoa road for construction but it seems that all the above are becoming a nine-day wonder,” Mr Ameyaw lamented.

The convener also claimed “due to the deplorable nature of our roads our pregnant women lose their lives, and unborn children. The road has caused so many miscarriages and stillbirths.”

This was corroborated by some women who say they have suffered pregnancy complications as a result of the poor road.

The Regent of Nyamekrom, Augustine Afum Ohene and other residents, said the Nyamekrom road is the only alternate road to Suhum which served its purpose recently when the Suhum to Koforidua road was flooded, therefore, it must be given the needed attention.

The Assembly member for Nyamekrom, Enock Boahene, said he is being threatened by his people because he continued to reiterate failed assurances of the MP to the people anytime they attempted to demonstrate. 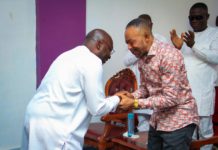