Embattled R&B star R Kelly has been filmed telling a room full of people it is “too late” for his musical influence to be curtailed.

The video was originally uploaded to Facebook on 17 May, as the singer faced fresh allegations of sexual misconduct.

“I’m handcuffed by my destiny,” he says, clutching a cigar. “They should’ve did this [expletive] 30 years ago.

“It’s too late. The music has been injected into the world.”

R Kelly has been dogged for years by allegations of sexual abuse; with claims of underage sex, and allegations that he trapped several women in a “sex cult” – all of which he denies.

The star, whose hits include I Believe I Can Fly and The World’s Greatest, has always denied misconduct; but his reputation and business dealings have taken a hit in recent weeks after the rise of a #MuteRKelly campaign.

The movement seeks to discourage people from listening to Kelly’s music as a result of the allegations against him, and has asked his record label, concert promoters, ticket sellers and streaming services to withdraw their support.

Spotify removed his music from its playlists on 10 May (although his music is still available on the platform). The following day, Apple Music announced it had taken similar steps.

In the Facebook video, which was originally reported by The Grio, Kelly appears to address the campaign, saying: “I got a million [people] hating me and 40 billion [people] loving me.”

He goes on to propose a toast to all the “strong” men in the room.

“[People] like you is why I still continue to do what I do, because I have a basketball mentality,” he says. “As long as I’ve got the ball, the world is on defence.” 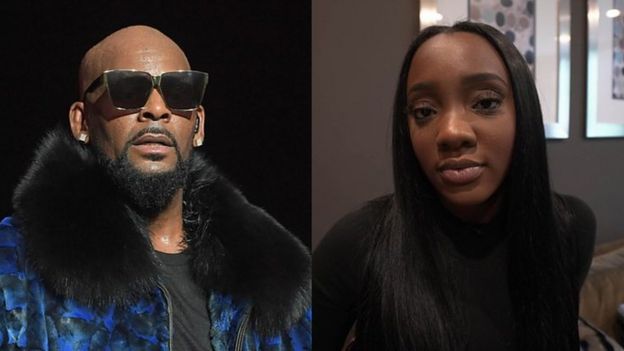 Faith Rodgers accuses the star of physical and verbal abuse

On Monday, days after the video emerged, a Texas woman filed court documents accusing Kelly of sexual slavery and knowingly infecting her with herpes.

Faith Rodgers said she was mentally, physically and verbally abused by the star, with whom she had a relationship for more than a year.

In an interview with BBC Three, she described “rough” and “embarrassing” sexual encounters, and being introduced to a circle of women Kelly called his “family”, who all referred to him as “Daddy”.

She says they followed a series of rules set by the singer like standing up, walking to him and kissing him on the mouth whenever he entered the room.

“He’s the master and they’re his slaves,” she said.

A representative for Kelly said in April that he “categorically denies all claims and allegations” in Ms Rodgers legal case; but he has yet to respond to the latest allegations.