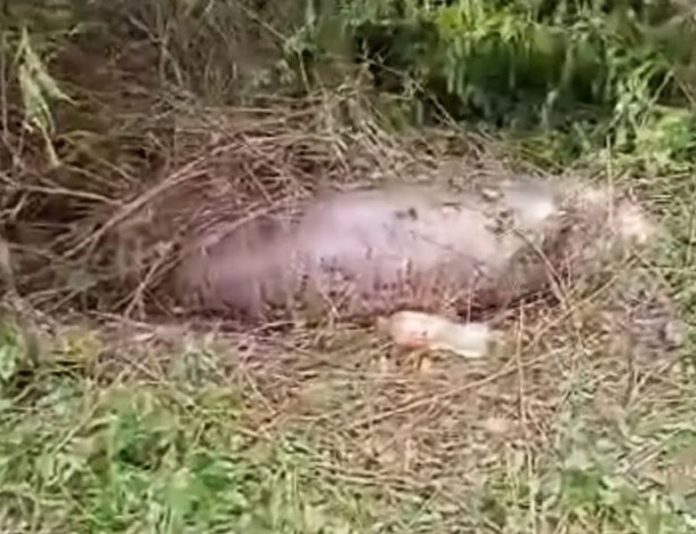 A ravenous Burmese python swallowed a cow before its stomach swelled so much it burst and died.

The 15ft-long snake slithered into the grassy pasture where it attacked a grazing two-year-old cattle in Phitsanulok province, northern Thailand, on August 21.

The farmer, who was searching for the missing cow, which had disappeared three days before, was shocked when he found the enormous serpent instead.

Footage shows the snake sprawled in the tall grass while its stretched stomach was split open.

Village official Nirun Leewattanakul said: “The python must have been hungry and saw the cow. It then strangled the cow to kill it before swallowing its whole body.

“However, after the cow died inside the snake, its body became swollen and stretched the snake’s stomach even more. It was such a scary scene.”

The snake, estimated to be eight years old, eventually died as its stomach had ruptured before it could digest the dead cow.

After being checked by authorities, the animals were burnt and buried in the vacant lot.

No other animals were reported to have been attacked by the snake.

Burmese pythons have an amazing ability to consume very large victims as they can easily digest food that is almost double their body mass.

Their huge jaws can also unlock to stretch around larger prey.

Shopper Helaina Alati was looking for spices when she turned her head and saw the reptile “just 20cm from my face”.

She told Guardian Australia: “It just wanted to say hello.”

She said it was initially curled up behind the spices and that dozens of people “must have walked past it”.

Woolworths staff “reacted quickly and calmly” to cordon off the area to keep customers safer, a supermarket spokesperson said.

While in April a massive python had to be dragged from a toilet after it climbed through the system and bit a man’s backside.

It was the second similar worrying attack reported in southeast Asia.

The emergency services were called after unsuspecting Somchai, 45, felt something bite him – and soon saw the head of the snake peering out of the bowl.

It happened in Samut Prakan province, central Thailand, before the 8ft long reptile attempted to escape.