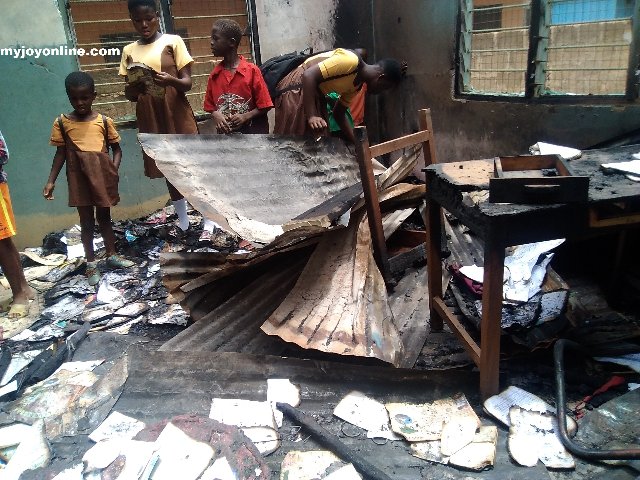 Pupils and teachers of Ampeyoo-Krofrom D/A Junior High School, near Kumasi in the Ashanti region have been displaced after fire razed their classrooms and offices on Thursday.

The fire, which is believed to have started around 2:am on Thursday, destroyed three offices and classrooms in the school as well as furniture, computers, books and other school materials.

In an interview with Adom News, the headmistress of the school, Joyce Osei Manu, recounting the lost lamented how it was going to affect teaching and learning, especially the final year pupils.

“I had to report here around 3:15 am because of the fire only to realise we have lost everything; our teaching and learning materials, laptops and other valuables,” the troubled headmistress said.

Meanwhile, the assemblyman for the area, Bismark Addai Dumoh explained temporary measures were being worked on to get the pupils back to the classroom.

“We are hoping in a month or two we would be able to get new classrooms for the pupils but for now, the assembly has decided they will join a nearby school, Ampabame R/C to enable them continue with their studies,” he assured.

Though the cause of fire is still not known, Mr Dumoh disclosed he suspects arson.

“I can say that it was someone who did that because we came to meet part of the classroom window cut off so there is no way this can be an electrical fault,” he claimed.