Adomonline.com
Home World United Kingdom Prince William Broke Seriously Important Protocol On A Recent Trip
Facebook
WhatsApp
Twitter
Telegram
Email
Pinterest
Print
During the Duke and Duchess of Cambridge’s five-day tour of Poland and Germany in July, Prince George and Princess Charlotte stole the show with their adorable antics and undeniable cuteness.
But, as pointed out by Vogue, it was actually a very big deal that the foursome was traveling together.
According to BBC, it’s protocol that heirs to the throne not travel together, which means that Prince William and Prince George shouldn’t be on the same plane. The reason being that in case of a serious accident, the lineage to the throne needs to remain intact.
But it turns out getting around the protocol is easy, as Prince William can simply ask the queen for permission and she can give her blessing for the family to travel together. Prince William previously asked for permission when he took Prince George on his trip to Australia and New Zealand.
“While there is no official rule on this, and royal heirs have travelled together in the past, it is something that the queen has the final say on,” the royal press office said in a statement to BBC’s Newsround show at the time.
The entire family has traveled together to Canada before and, of course, their recent trip to Poland and Germany.
And to think that if they obeyed royal protocol, we wouldn’t have all these cute photos! 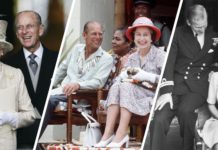